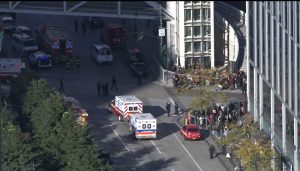 In this still image taken from video, police and ambulances respond to report of gunfire a few blocks from the World Trade Center in New York on Tuesday, Oct. 31, 2017. (AP Photo)

I know this is no laughing matter, as today a suspect in New York city killed 8 people and injured 12 with a rental truck.

Is it not time to ban rental trucks, box trucks and any other vehicle that has been used in a deadly attack not just here in America but in Europe?

I’m not trying to be crass or uncaring, but when is enough, enough? Now you know that I’m just saying this because the Democrat left will rush this out to every Main Stream Media outlet. If you’re not catching my sarcasm you should be.

I watch as the court system in this country fight like hell to keep illegal immigrants pouring into this great country. The left will tell you that we need to be compassionate and caring and that we should build bridges and not walls.

Democrats embrace lawlessness. They tell you they are for the little guy but tell that to the families of the 20 people who were killed or injured today in New York City.

Why do you think these terrorist pick places like New York City? Why not Texas or Alabama or Indiana?

Terrorists go to the place of least resistance. They perform their terror in gun-free zones, College campuses or the streets of New York City. What happens when these terrorists attack? We should not rush to judgement on the ideology of the perpetrator. Yet, whenever there is a shooting it’s the gun to blame. We need “common sense gun control”.

Is it now time for “common sense rental truck control”?

As we watch judges legislate from the bench. As our former President Barack Obama used his pen and a phone to allow millions of illegal immigrants (DACA) into this country it’s no wonder we are in the place we are today.

It’s tragic what happened in New York City today. It’s heartbreaking that families are devastated at the loss of their love ones and it’s tragic that these kinds of events take place.

Unfortunately, it’s not surprising. We are living in a time and place where politics is placed above morality. Where God has been run out of the classroom and culture. We watch as immigrants come into this great country and take jobs, education and healthcare from people who truly need it. We watch as veterans are homeless and the VA is broken.

It’s time America. It’s time to take back our country. It’s time to kick politicians out of office that don’t believe in securing our border, bringing back jobs or returning God to his rightful place in society. It’s time to make America First.

We have the power to stop these ugly tragedies.

The question is, do we have the desire to?