Time Columnist Literally Makes Up Quote and Attributes It to Trump. No, This Is Not #FakeNews. 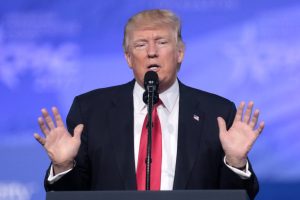 Here is a real news story about some very fake news.

If you heard today that Trump said Kim Jong Un would be a better president than “Sleepy Joe Biden,” you may have chuckled and agreed with our witty president. Kidding! (Sorta.)

While we certainly do have a gregarious president who is not afraid to stick it to his political and ideological opponents, this isn’t actually something he said, despite the claim from Time Magazine’s foreign affairs columnist and editor-at-large, Ian Bremmer, over the weekend.

Bremmer has now had to admit that he fabricated the “objectively ludicrous quote” and also Trump has responded, and it’s all hilarious.

OK, let’s start at the beginning.

But not before it was shared widely by Rep. Ted Lieu, D-Calif., a prominent Trump critic, and a swath of commentators and journalists, including anti-Trump analyst Ana Navarro-Cardenas — leading Bremmer to later delete it.

Bremmer’s tweet captured a supposed quote from Trump, “Kim Jong Un is smarter and would make a better President than Sleepy Joe Biden.”

Journalists who were traveling with the President were unable to verify the quote, because, well, he didn’t say it.

If this alleged quote from Trump is accurate, it’s a huge propaganda win for the disgusting murderous tyrant that is King Jong Un.

But if this quote is fabricated, it’s a truly deceitful piece of Fake News.

And I’d like more than just Ian Bremmer’s say-so before I decide which. https://t.co/lyzdDrHfLN

UPDATE: @ianbremmer has now admitted that he fabricated this viral Trump quote. And yet it is being shared by journalists and congressmen as if it is real. pic.twitter.com/QgNd9DnN8g

Bremmer immediately tried to pass off his fake quote as bad humor, claiming that he had failed to clarify it was a joke because it was a “comment” on the state of the media.

If by “comment,” he means, demonstration of how easy it is to get anti-Trump leftists to believe literally anything they hear about him (*cough* Steele dossier *cough cough*), well, then, I guess it was a good “comment.”

Bremmer weakly defended his fake quote as “kinda plausible … especially on Twitter, where people automatically support whatever political position they have.”

Well, that’s certainly true. People like Ted Lieu were perfectly ready and willing to believe that Trump had made these comments, because 2019.

Methinks, however, that Bremmer is not in fact the brilliant social commentator he’s trying to make himself out to be, and either didn’t realize his “joke” would be taken so seriously or legit thought people would believe him if he made up this quote.

Either way, the Trumpster himself was, naturally, compelled to weigh in.