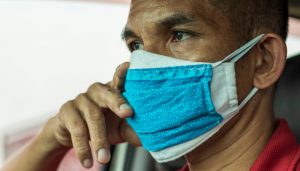 Thousands of citizens who live in the state of Oregon are very, very displeased with a new proposal by Democratic Oregon Gov. Kate Brown’s health department that is currently proposing a permanent mask mandate.

The policy proposal has receive a record number of public comments, five times more than the previous record holder, which tells you just how much people hate this idea. And who can blame them? This is clearly about power and control.

Wood floated the proposal to keep masking requirements in place until “no longer necessary to address the effects of the pandemic in the workplace” last month. Wood said that the new “permanent” rule is needed to keep the current regulations from expiring on May 4.

Republican state Sen. Kim Thatcher ripped Brown’s administration for the proposal, accusing the governor of throwing more uncertainty at business owners who have already been hammered by the COVID-19 pandemic and heavy-handed regulations.

“When will masks be unnecessary? What scientific studies do these mandates rely on, particularly now that the vaccine is days away from being available to everyone?” Thatcher went on to ask. “Businesses have had to play ‘mask cop’ for the better part of a year now. They deserve some certainty on when they will no longer be threatened with fines.”

Many states in America have already started to lift mask mandates. Which is a good thing as it indicates that folks are starting to realize that the masks are pretty much useless in stopping the spread of this illness.

At the end of the day, this is a power play. If Democratic governors and politicians feel that they can get the people of this country to do whatever they say as long as they create a situation in which they can manipulate fear, that’s the tactic they will stick to in order to usurp our power and authority as citizens. Plain and simple.