This Woman Tried To Rally Support To Dox An Elderly Trump Supporter After Attacking Him, But It Didn’t Go So Well 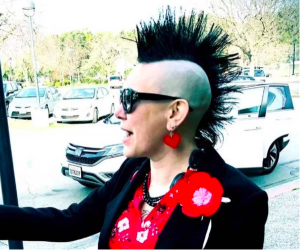 In a now-deleted Facebook post, a mohawked, maniacally MAGA-phobic woman boasted to the world about the heroism she demonstrated when she harassed an elderly Trump supporter, attempted to gain sensitive information about him, and chased him out of the store.

What did the man do that was so heinous as to warrant the fury of this rooster-looking harpy?

Just about the worst thing anyone could do, of course, which is to quietly sip coffee while wearing a red MAGA hat.

Parker Mankey, whom we’ll now affectionately refer to as Mrs. Mankey because it sounds hilarious, an outspoken Bernie Sanders supporter (big surprise) regaled her followers with the story: 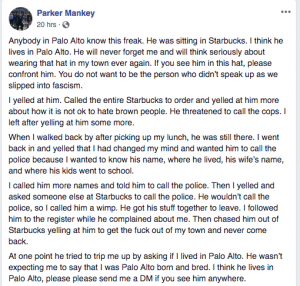 Look at the big boots on Mrs. Mankey! “Her town”? This is like a scene out of a spaghetti western, except the big, bad horse thief telling people that this town ain’t big enough for the two of ’em is a psycho-socialist who never grew out of her high school haircut.

“I yelled at him. Called the entire Starbucks to order and yelled at him more about how it is not ok to hate brown people,” Mrs. Mankey recalled, though she never once mentions the man actually saying anything about “brown people,” or anything else at all to warrant the attack. “He threatened to call the cops. I left after yelling at him some more.”

Seething with Trump derangement-induced mania, Mrs. Mankey says she actually went back into the coffee shop to scream at this poor guy some more! Only this time, she kicked it up a few notches and made it personal: “I went back in and yelled that I had changed my mind and wanted him to call the police because I wanted to know his name, where he lived, his wife’s name, and where his kids went to school.”

In her post, Mrs. Mankey also lamented that she was the only person in the packed Starbucks making an idiot of herself and screaming at a total stranger.

“There were other white people there who should have called him out,” she stated. “It is the duty of every white person in America to stand up to this every time they see it.”

I cannot for the life of me fathom why being white places some kind of burden on a person to perpetually and publicly remind the world that we aren’t all racists. Do we need to carry around silent auction paddles that say, “I’m white but I’m not a racist” to hold up every time we commit a public microaggression merely by being white? 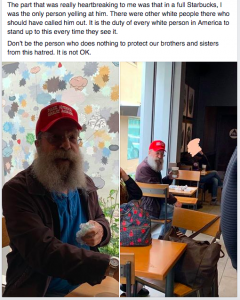 As this poor guy, who actually looks like a nice guy and probably gives the best candy on Halloween, tried to head for the cash register, Mrs. Mankey proudly followed him and “called him more names.” When the man refused to call the police, Mrs. Mankey, summoning all the wit and decency of a 3rd-grade bully, called him a “wimp” and “chased him out of Starbucks yelling at him to get the f*ck out” of her town.

I wonder how good it must have felt to be Mrs. Mankey in that moment. Morally superior, hair perfectly erect, and basking in the glow of victory after defending “her town” from such a vicious predator.

Well, I hope Mrs. Mankey enjoyed herself (not really), because God took care of this situation right quick.

Now, allow me to insert a quick disclaimer: I do not condone doxxing. Regardless of who it is done to or for what purpose, it is harassment. I do, however, enjoy a picture-perfect case of poetic justice. If you do too, enjoy!

Side note: it should fill you with a healthy dose of fear that people like this are working in the public school system. Let that sink in.

But don’t worry, y’all. The saga doesn’t end there. Later that day, Mrs. Mankey herself got to take a big ol’ swig of her own medicine when vigilantes of the internet found her employer:

And, just a few hours later…

Now, isn’t that a thing of beauty?

Personally, I hope the fine people of Palo Alto do find the victim of Mrs. Mankey’s psychotic abuse. I hope he returns to that Starbucks and is treated to a cup of joe by those decent people, white or not, who saw his MAGA hat and simply moved on with their lives.

If nothing else, I hope he’s able to sit and enjoy his next cup in peace.