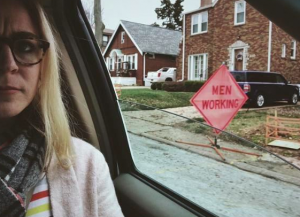 Oh, the perpetually-triggered social justice warrior. They’re the heresy-hunters of the secular world, ever discerning and searching out the slightest wrong against the settled orthodoxy of (forced) equality and inclusivity.

One of them, a lady by the name of Caitlyn Collins, had a rather hilarious faceplant when she tried to take her expertise on the myth of gender inequality into the field. Specifically, Ms. Collins took a little field trip over to a construction site where she saw the horror of all horrors: a “Men Working” sign.

How Ms. Collins was able to overcome the gut-wrenching pain of being triggered by such a hateful, sexist sign is beyond me. As a woman, I can barely hold back the tears when I see males used in the branding of my favorite paper products, let alone a sign that stands as a beacon of doom for anyone with a pair of X chromosomes who dares set a dainty little foot on their job site.

Mustering all that bravery we women have to have these days in order to survive such aggression, Ms. Collins pulled up to the site and proceeded to heckle the workers there.

Lucky for us, she bragged about it on Twitter and screenshots were grabbed: 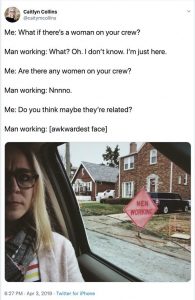 For those who don’t speak dingbat, allow me to translate:

Collins: What if there’s a woman on your crew? Why don’t you guys invest in signage that accurately represents the diverse demographics of the team? If nobody makes those signs, why don’t you become citizen-activists and demand that the sign company starts making them? You don’t want to trigger anybody!

Man doing his physically demanding job: Wha? What do you want? I was just in the middle of working.

Collins: Are there any women on your crew? Your highly offensive signage seems to indicate otherwise.

Man: No, there are no women on this crew. Why does that matter to you? Am I on TV or something?

Collins: I see. You hate women and want to see to it that they’re all either secretaries or barefoot and pregnant making you sandwiches. Your sign (and the systematic workplace sexism it represents) is without a doubt the single biggest factor in preventing women from seeking employment within your inherently extremely dangerous industry that requires a working knowledge of building codes, using tools, and other gross man stuff. Good day, sir.

Of course, Ms. Collins seemed to think that she deserved a bit of recognition for the self-sacrificing bravery she demonstrated in taking that evil, sexist construction worker down a peg or two, but the hordes of Twitter set her straight right quick, and it was glorious:

This is peak privilege. This professor descended from her academic halls to chastise a working man & spread some intersectionality, and now she is proud of it. She totally exposes herself as a jerk and a joke. This is the Left. https://t.co/ZUQVVJuzdd

Of course, Ben Shapiro wasn’t going to let this one slide without succinctly nailing down why Ms. Collins clearly doesn’t know what on earth she’s talking about:

Nailed it. It’s because of signs like this that women aren’t doing physical labor reliant on superior upper body strength in numbers sufficient to satisfy feminists. https://t.co/jRcklJYb9C

Chad Felix Greene was also eager to point out Ms. Collins for the overwhelming privilege (yup, I said the P-word and I’m not sorry) she demonstrated with her little rant:

Female privilege is sitting in a car lecturing men working outside in the dirt to support the city infrastructure on how they are harming hypothetical women by doing so next to a sign that she imagines must offend these hypothetical women as much as it does her. https://t.co/qmbQTPYhKY

And, my personal favorite from Ashe Schow:

I was going to go into construction/road maintenance, but then I saw a sign that said “MEN working” and I assumed I wasn’t allowed.

Of course, Ms. Collins locked her Twitter account down right quick after the internet called her out for the asininity of her remarks. It’s a shame, because there’s much for these neo-feminists to learn before they run their mouths, especially from women in skilled trades who, I’m sure, would be more than happy to clue her in on why so few women even seek these jobs.

Now, it just so happens that this writer is married to a construction worker—a structural steel/ironworker and roofer with a long history in other skilled trades, to be exact. And, marvel of marvels, he’s a pretty strong dude. He owns, and has extensive experience with, a vast array of tools and heavy machinery. He spends a good amount of his spare time studying up on how to excel in his trade with the best techniques and practices. His job, one of the top ten most dangerous in America, demands it.

And, guess what! He’s worked with a small handful of women on his crew. They work like absolute beasts and get the job done without an ounce of complaining, unlike some of the dudes. Some of them, based on experience and performance, have even been promoted above him and receive higher pay (yeah, that actually happens!). These women are truly a rare breed. They’re not in trades to make a big statement or advance a social agenda. They love their physically-taxing work, and they kick butt at it. And I tell you what, they aren’t going to let a little microaggressive safety sign stop them.