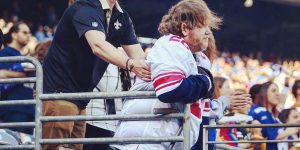 You know, we complain a lot about the media, but at the end of the day, what are they really doing to us?

Sure, they tell a lot of lies and spin stories in a way that suits their political interest or bloodthirsty quest for higher ratings.

But here’s a little secret rarely discussed: they feed on our controversy. They thrust themselves at the center of the most sensitive issues in our nation and thrive on our bickering and fighting over things that, if we didn’t have the media driving the steak between us, we’d probably be able to settle pretty well with some good old-fashioned common American values.

Meanwhile, real-life Americans don’t seem to have let hatred fully overtake their hearts…yet. That is, at least, if a recent viral video from an NFL game is any indication.

And dear Lord Jesus, for the sake of every single individual in our great and beautiful nation, I sure hope it is.

Photo from NY: A Saints fans helps a disabled Giants fan sitting in front of him to stay standing during the National Anthem pic.twitter.com/2ptFCQ3EdV

The National Anthem seems to have brought nothing but controversy and strife to our country over the last few years. And while no one is immediately to blame (OK, Kaepernick is to blame. And the media. And the NFL. And the adverti–anyway, I digress), it is distressing to see how it has dramatically changed our values in such a short time.

But at a recent Saints-Giants game in New York, two fans went viral for bridging the gap of rival teams and finding a common ground in love and respect for their nation, and its time-honored anthem.

The photo, which is getting far too little news coverage in a time we desperately need a story like this, was taken and shared by Michael DeMocker, and shows a Saints fan kindly helping a disabled Giants fan stand as the anthem is played in the stadium.

While public support for and interest in the NFL is plummeting, this photo reminds us just how much football–and the anthem–can actually bring us together. At the end of the day, it’s not about what team you follow or side of the aisle you’re on, it’s about love for your country and gratitude for those who are willing to fight for the values we have here, values that you can’t find anywhere else on earth.

Let’s pray that we see a widespread return of this simple spirit of brotherhood to our country very, very soon. We need it, folks.