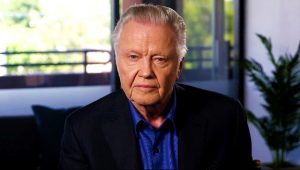 A video of conservative actor Jon Voight sweeping off seats for Gold Star families at President Donald Trump’s “Salute to America” celebration is making its way around the Internet and you know what, it deserves every bit of the attention.

How often does a celebrated actor in the liberal cesspool of Hollywood get video recorded doing something as honorable as this? It’s almost unheard of, which is why Voight is such a treasure.

Gold Star families are the relatives of U.S. military members who paid the ultimate sacrifice in battle for our freedom.

“This is what it’s all about!” the “Team Trump” social media guru added (video below).

Voight has been one of the few voices in Hollywood to praise the president. In May, for example, the Academy Award winner posted a viral video to his Twitter account declaring Trump “the greatest president since Abraham Lincoln.”

Twitter users were pleased with Mr. Voight’s gesture, replying to the video, “More class than 90% of Hollywood elites,” and, “He is a humble man. Hat off for him.”

Another Twitter user wrote, “Great work Johhny! Couldn’t you also see other Hollywood actors like Johnny Depp & Leonardo DiCaprio do this? Neither could I.”

In a world where the vast majority of those in the entertainment industry are nothing more than cogs in the wheel of the giant progressive propaganda machine, it’s beyond refreshing to have someone like Voight out there representing true patriots, knowing that he is also a master of his craft.

Not everyone who stands up boldly for American values in Hollywood gets blacklisted, if you have a high enough pedigree. Let’s hope Voight’s success continues and that he keeps standing boldly for America and those who have sacrificed so much to see her flourish.