This Target Manager Wouldn’t Sell Him A Toothbrush For $.01, So He Called The Police. Now, She’s Rich. 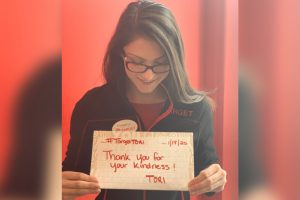 Fun fact: my first paying job, like most kids out of high school, was running a cash register.

Nestled in a quiet little corner of my city was this small, podunk IGA grocery store where I had the pleasure of scanning and bagging bajillions of groceries over the course of a year or so.

Not only did I learn how to do fast mental math at this job every time the register broke down (often), I learned that people can be everloving butt puppies to society’s “servant class” of cashiers, waitresses, fast food workers, and so on.

I still remember quite vividly the man (whose eyebrows looked like Tom Selleck’s mustache) who screamed at me because the stack of coins he placed on the conveyor belt were lost as I continued bagging the items of the customer ahead of him. Because, you know, small things fit into small holes and get lost. Fun times.

All that to say, each of us could stand to be a hell of a lot more considerate in how we treat folks whose job it is to serve us.

A snowflake journalist and Twitter warrior learned that lesson the hard way after trying to rally a social media lynch mob who refused to sell him a hilariously expensive electric toothbrush for a penny.

This @target manager Tori is not honoring the price of their items per massachusetts law pic.twitter.com/7IYMjCcutZ

When Leavitt came to Target’s Swansea, Massachusetts location, it seems he was in the mood for the best dental hygiene experience money could buy.

Upon seeing an Oral-B Pro 5000 toothbrush, it must have felt like his entire fate was unfolding before his eyes. Here, in his hands, laid the toothbrush that would be the answer to all his problems. The toothbrush—nay, the savior his plaque-caked chompers had so patiently awaited. And—what’s this—only a penny?! Surely it must be a sign from the heavens! Leavitt and the pricy piece of equipment were surely meant to be.

The unbridled euphoria of finding the holy grail of toothbrushes for such a miraculously modest price was quickly shattered, however, once Target Tori was called to the register.

When Tori came to the register to find an actual grown man pitching a fit and demanding this toothbrush—which was on sale for $89.99 at the time—for a penny, she wasn’t having any of it, as clearly evidenced by her unimpressed expression in Leavitt’s super mature photo of her.

So, did Leavitt realize his error and resign himself to the fact that God hadn’t parted his dental care Red Sea that day and settle for a plane-jane toothbrush?

Nope. He called the cops.

I did not call 911. I called the business number for the police and told them it was not an emergency and they could take their time and explained the situation.

Seriously, guys. He called the police over the toothbrush.

Corporations like @target are not above the law. The police officer told me they’d testify that they saw the price and that the manager wouldn’t sell me the item for the price listed.

So, this dude is going to sue Target over the damn toothbrush. He’s dead serious.

Naturally, it didn’t take long for the fine People of Twitter™ to set him straight:

The officers also need to learn to read pic.twitter.com/y5TOaeJ27E

It’s a shame you don’t know the law.
Read up before you go off half cocked. pic.twitter.com/ZYOXS9ngu1

Why did Leavitt think he was entitled to an expensive toothbrush for whatever he saw fit to pay? Well, he’s a liberal, so naturally it’s because life has dealt him a rough hand and he needs a top-of-the-line toothbrush because he hasn’t darkened the door of a dentist office in several years, he claims:

I have not been able to afford to go to a dentist in over three years. So yes I wanted a good toothbrush and was thrilled to see such an amazing prize on an @OralB but @target refused to honor it and now I have to take them to court

“Such an amazing price.” Oh my word, you guys. Thankfully, the Twitter Detectives were on the case on this one:

But that’s not where this thrilling saga of entitlement and dental equipment ends, no siree.

Remember the hero of our story, kids? Target Tori, the manager who refused to basically allow this limpwristed manchild to steal a toothbrush? Well, the People of Twitter™ had her covered.

Carpe Donktum, the infamous pro-Trump memesmith behind the viral video of Trump shooting media outlets and leftist politicians, started a GoFundMe for Tori, hoping to send the girl on a likely much-deserved vacation.

Tori took to Twitter herself to express her thanks to the hundreds of donors and thousands of Twitter users who supported her: