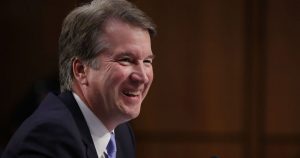 The accusations continue to mount against Judge Brett Kavanaugh as the Senate Judiciary Committee grapples with whether or not to vote to confirm him to the Supreme Court.

First, terrifying allegations of sexual assault at an unknown place at an unknown time on an unknown date witnessed by several people who don’t remember a thing.

Then, ghastly allegations of a highly-coordinated sexual assault ring that lured in and attacked young girls unawares, of which Kavanaugh may have been in the general vicinity when this may have occurred, and may or may not have partaken, according to a woman who corroborated her story by name four witnesses, one of whom has no idea who she is, another of whom is dead, and the other two who cannot be contacted.

The evidence began to mount against Kavanaugh when a man bravely came forward to declare Kavanaugh once assaulted his friend on a boat…before turning around and admitting he made the whole thing up.

Oh, but then–they got him this time–he was once involved in an altercation at a bar during which he threw ice–ice!!–at another bar patron, and was arrested. Well, he spoke with police about the incident…but, you know…ice!!

As the facts begin to line up to portray the inner nature of a man who at the very least have occasionally drunk alcohol as a young man and even been inebriated at least once in his life, new video evidence has now been released that undoubtedly implicates him in what is clearly a lifetime of unthinkable behavior.

in 1964, Brett Kavanaugh was caught on camera kicking a woman!

(Warning: some readers may find this footage disturbing)

It’s over, Kavanaugh. We’ve got you.