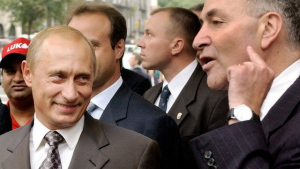 The Democrats all have a very short memory, especially when it comes to chumming it up with Russia.

So despite their own very docile and friendly relationship with Russia in the past, they’ve had no problem slamming Donald Trump up and down for his recent press conference with Putin, clearly driven by a newfound sense of patriotism and American military strength that no one knew they had.

Senate majority leader Chuck Schumer took to the Senate floor this week to pontificate about Trump’s lack of strength and how bullies like Putin ought to be dealt with Who knew strength was something Democrats expected in a leader? We certainly heard nothing about this when Obama literally bowed to foreign dignitaries. Or when he told Putin surrogate he’d have “more flexibility after the election.” Or when he sat and let Putin lecture him for an hour about how the US had created bad relations between the two world powers.

Anywho, Schumer seemed convinced he would have been much tougher on Putin when he bragged “I’m from Brooklyn. We learned one thing there, if we learned anything: when there’s a bully around, as Putin is, you show strength. But President Trump showed abject weakness. You know what that means? The bully will continue to take advantage of him. If President Trump was such an easy mark in Helsinki, President Putin will realize he’s an easy mark elsewhere.”

So…should Trump have brought Putin a dozen Krispy Kreme doughnuts? Because that’s apparently how Schumer thinks you show strength to Putin, as it’s exactly what he did when he had the opportunity to meet the oligarch himself back in 2003.

“When I showed the president of Russia a Krispy Kreme doughnut and he ate it and said it was good, that was one of the more surreal moments I’ve had in politics.”

Schumer’s softness on Putin didn’t end there, as the Daily Wire adds:

In 2008, Schumer buddied up with Putin, writing in an op-ed for The Wall Street Journal — headlined “Russia Can Be Part of the Answer on Iran​” — that Putin could help in negotiations.

Yeah…Twitter wasn’t too kind on this tough guy:

The Deep State claims Putin has bought Trump and I bet it cost a bundle. However, it appears that he picked up Chuck Schumer for a cup of coffee and a doughnut. 😂