Summer is almost here. The sun is shining, the birds are singing, the garden is blooming, and the fake news is rotting the minds of every internet-accessing American.

Okay, that has nothing to do with summer, but it sounded nice.

As the current session of Congress drags on, fake news commentary drags on right along with it. Most recently, ultra-leftist New York Times writer Wajahat Ali offered a hilariously false hot take on Tuesday, mocking the idea that Republicans, especially Rep. Dan Crenshaw (R-TX), are “patriots.”

In a now-deleted tweet, Ali challenged his followers to confront their friendly neighborhood Republican and aim for a “gotcha!” moment if they didn’t support the failed 9/11 victims’ compensation fund.

From “Quick-Draw” Ryan Saavedra, who snapped a screenshot of the ill-fated tweet: 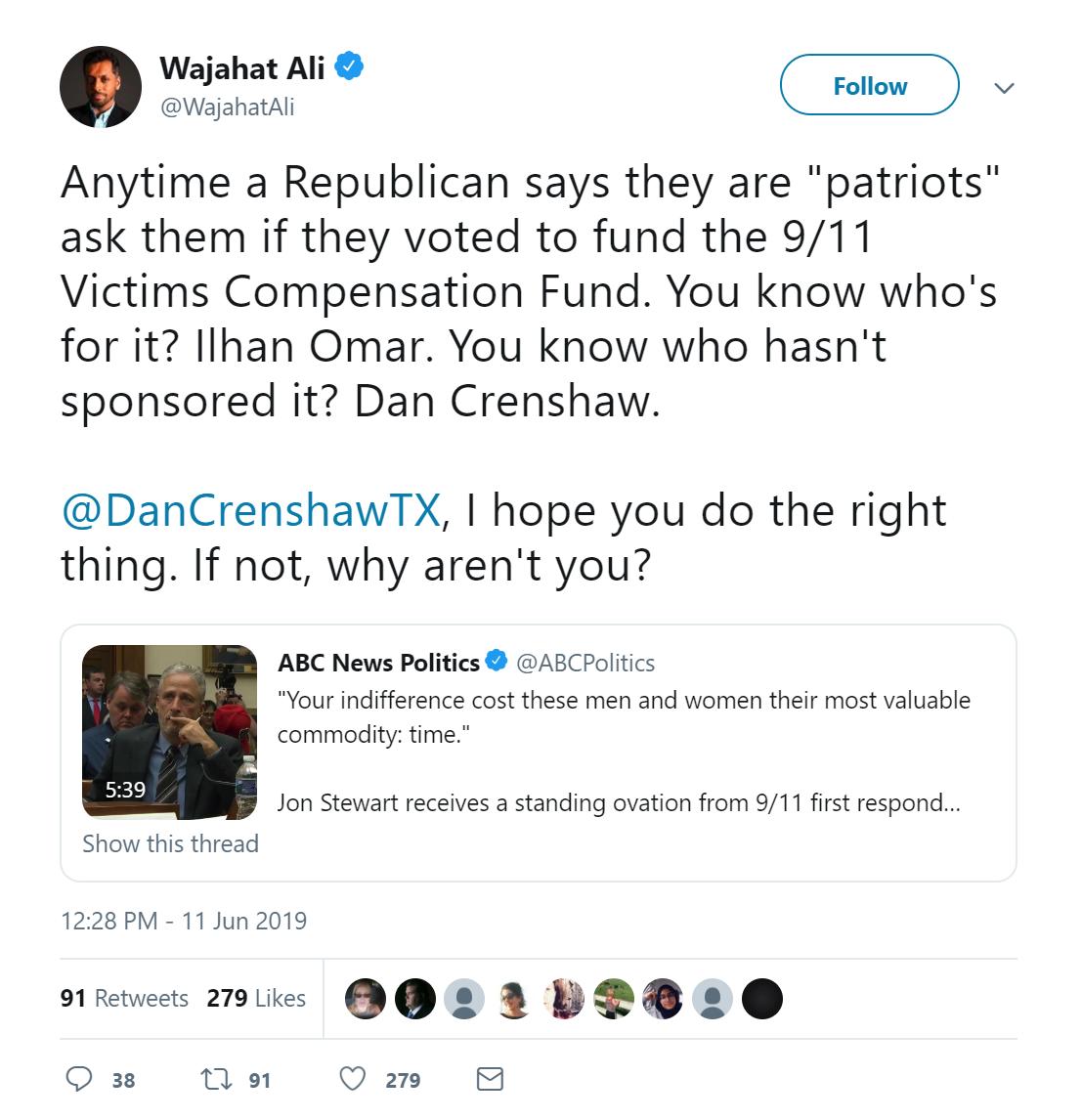 Ali’s challenge to Rep. Crenshaw was prompted largely by comedian Jon Stewart scolding members of Congress on Tuesday for failing “to ensure that a victims’ compensation fund set up after the 9/11 attacks won’t run out of money—and for skipping a hearing devoted to that very crisis,” Fox News reported.

This is a straight up lie. @DanCrenshawTX is a cosponsor if the 9/11 victim compensation fund act. It’s so easy to check! https://t.co/CR4r4yOwUF pic.twitter.com/VMFdmYy5N5

How on earth do you miss that one, Ali? This is civics 101, here. When a representative or senator authors or co-sponsors a piece of legislation you support or oppose, you contact them to make your stance known and encourage them to act accordingly. If the representative supported a bill you support, it’s basic courtesy to thank them for it.

Or, you know, just hang out on the sidelines while your representative government never hears from you, except when you call them out on social media. That’s cool, too.

Of course, Crenshaw also saw the tweet and was quite eager to set Mr. Ali straight himself, with an x-ray scan of the injury that got him his eyepatch (he doesn’t just wear it for funsies) while fighting terrorists overseas. You know, for good measure.

Hey “journalist,” maybe you should check your facts. I am a co-sponsor. Nice try though.

Although Ali was quick to delete his abysmal tweet, he followed it up with this rather dubious apology:

Thanks for letting me know. I'm glad you did and I have no problem correcting and updating the record with facts. Now try it with your comments about Ilhan Omar. You'll feel better. Sincerely, a fellow patriot. https://t.co/6bAsYBpxsY

Well if that man ain’t the very model of contrition and humility!

For the record, Ali has also posted follow-up tweets with screenshots of disgusting threats from those who supposedly support Dan Crenshaw.

As a long-time fan of Lt. Dan myself, I feel wholly confident in saying that Crenshaw would not in a million years condone the messages Ali is allegedly receiving.

If you feel compelled to send violent messages to Ali or his ilk, stop, set your phone down, and go listen to the birds sing.

Or, be like the rest of the People Of Twitter™ and keep laying into him for his lecture-apology:

“I was wrong, therefore you must be wrong about something as well” might make you feel better, but it’s not a real argument. Just take the loss.