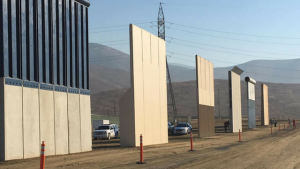 It’s actually highly unfortunate that the left shrouds the debate over our nation’s borders with emotionalism, finger-pointing, and cries of racism, but…well, that’s just how they discuss every major issue, now, isn’t it?

Anyway, what is missed when leftist celebrities like John Cusack or Samantha Bee act like the sky is falling because some illegal border crossers get separated from their children when detained–According to Obama policies, but who needs facts–is that securing the border is a serious issue of national security.

There is nothing wrong with taking into account the people who genuinely are fleeing violence in their countries of origin. But these people will in no way be refused help simply because we build a wall to stop terrorists.

Why should we allow our border to literally be wide open and not even enforced simply because people in Latin America who seek to legally claim asylum are genuinely worthy of consideration by our policymakers?

Judicial Watch reports that, years after they exposed the prominence of ISIS in a border region of the state of Chihuahua, Mexico, Customs and Border Patrol has announced they will be erecting a what one can only assume will be a big, beautiful, border wall.

The much-needed fence will be erected between Santa Teresa, New Mexico, and Ciudad Juárez in the Mexican state of Chihuahua. It’s an area where ISIS cells operate and Juárez Cartel smugglers help terrorists through the desert and across the border. A 20-mile section of existing “vehicle barrier” located west of the Santa Teresa Port of Entry will be replaced with an 18 to 30-foot high bollard-style wall, according to an announcement issued by Customs and Border Patrol (CBP). The announcement includes pictures of the existing railing, which is a joke.

And, right on cue, are the people who totally don’t get that this is not racist:

A local open borders group is organizing a protest (All Against the Wall Rally) next week near the Santa Teresa Port of Entry. “The border wall is an affront to our communities; an attack on our wildlife; and a symbol of hate, fear, and divisiveness,” the group states in its website. “We invite people from around the region and nation to join us for an event on Saturday, June 2, 5-8 pm, where we will gather lawfully and peacefully on both sides of the border in the path of construction to demonstrate our unequivocal rejection of Trump’s border wall and all that it represents.”

I suppose the locks on their doors are symbols of hate, too? Goodness. It’s such a shame we can’t have civil discussions that are based on reality instead of inflammatory language and vague terms like “hate”.