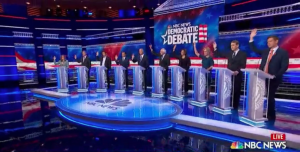 Time for a little confession: I did not watch the Democrat Party debates. Because I’m not a masochist.

Thankfully, there are plenty of others in conservative news media who are willing to endure the torture of watching a gaggle of morons in a cage match of empty talking points and question-evasion (thank you for your service, guys, you’re the real MVPs).

While reports indicate that the whole thing was an ideological bloodbath, there seems to have been one single issue on which every candidate agreed. And it’s so insane, it virtually guarantees Trump’s reelection.

According to the Daily Wire, the candidates were asked to raise their hand if they would support giving illegal immigrants “free” healthcare. “Free,” as in “I pay for it, you pay for it, everyone with a freakin’ job pays for it.”

And, you know what? Every single one of these sociopaths raised their hand. Every. Single. One.

And, what’s worse? They were enthusiastically applauded for it.

All of the Democrat presidential candidates say that they will give illegal aliens free health care paid for by American taxpayers #DemDebate2pic.twitter.com/19SlhhEr6x

Apparently, President Trump had better things to do Thursday night than to live tweet the entire debate, because this was the only issue that prompted a response from him at the time:

Trump wasn’t the only one to see the writing on the wall after the 2020 Dems went full dingbat. The New York Republican Party (yes, that exists) had this to say:

Raise your hand if you’re ready to hand President @realDonaldTrump victory in 2020 by putting illegal immigrants before American citizens.

Matthew Continetti, co-founder and editor-in-chief of the Washington Free Beacon, also scolded the Dems for their insanity:

Do the Democratic candidates have any idea what they are doing to themselves on the immigration issue?

Decriminalize border crossing, no deportations, free health care for illegal immigrants … Trump is going to have a field day. And deservedly so.

The Trump campaign has issued its own response to the debate, declaring it a clear victory for the president.

“The cast of characters may have changed, but the second night’s script was eerily like the first: a two-hour long infomercial for President Donald J. Trump’s re-election campaign,” a statement issued by campaign press secretary Kayleigh McEnany states. “All of the Democrats tripped over each other in a race to see who could stand out as the most leftist candidate, threatening government control of every aspect of people’s lives. We are many months away from seeing who the Democratic nominee will be, but one thing is clear — President Trump will be the hands-down victor after each and every Democrat debate.”

I’m glad I didn’t watch the debate. Looks like I might have had a stroke if I did.