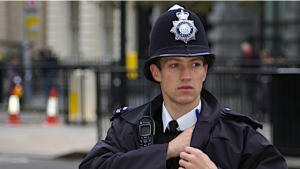 In case you were unaware, and there’s a good chance you are, the British government arrests tries, and imprisons people for “hate speech.”

So while conservatives and First Amendment advocates everywhere have good reason to be concerned about Facebook’s squishy definition of “hate speech” and their ability to silence voices they disagree with, we should still keep in mind that they’re a private company.

Let that sink in.

It is testament to how entrenched censorship has become in 21st-century Britain that a police force can so casually call for reports about speech.

This is a country whose communications laws and public-order legislation can be, and regularly are, used to punish hateful expression. Last year The Times reported that British police are arresting nine people a day for posting “offensive messages online.” In 2016, 3,300 people were detained and questioned for things they said online. In some parts of Britain the arrest rate for offensive speech has risen by nearly 900% in recent years. We Brits are sleepwalking into a police state.

Not content with punishing people for the offensive things they say on public online platforms, now there are moves afoot to punish them for what they say privately too. This week the Labour MP Lucy Powell put forward a Bill in parliament that would ban private online discussion forums because, she says, hate speech can fester in these “echo chambers.”

Right–our forefathers decided to launch a seemingly impossible revolution against the greatest military power the world had ever seen so that we could live free from oppressive monarchies.

But do not think for a moment that there isn’t a large cross-section of Americans who have completely abandoned those values and would love to see this level of censorship take place in the US, as Louder With Crowder‘s Brodigan and Kirchoff point out:

Leftists in America are salivating for this kind of dictatorial control. One reason the left is contorting itself into ethical pretzels over Brett Kavanaugh is because they hate the First Amendment, and want to chip away at it. The leftist judges Democrats want to appoint to the bench agree, and believe the freedom to say or write whatever you want is problematic. Free expression, the free exchange of ideas, undermines their plan for thought control.

Yes, thought control. Read the report above again. Tell me leftists aren’t actively engaged in censoring your thoughts. If you dare type something they find displeasing, the left labels it as “hate speech” and off to the pokey you go.

This is it is more vital than ever to defend free speech at home.