This Homeless Man Has A Pretty Good Reason for Breaking Into California Gov. Jerry Brown’s House 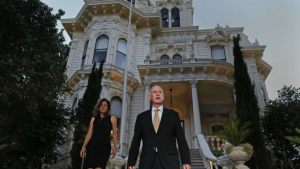 In what can only be described as an attempt to put into action the very same hypothetical scenario conservatives have been using to argue against illegal immigration for years, a homeless man was arrested recently for breaking into California Governor Jerry Brown’s house.

Steven Seeley, 51, was broke into Brown’s house last month and, according to California Highway Patrol, he figured it would have been fine because Brown is “an open-door policy kind of guy.”

Brown has been fighting hard to make sure no illegal immigrant is hassled by pesky ICE agents as they go about their business in the cities they call their second home. In fact, he believes so much in protecting people who demonstrate a lack of interest in obeying the law as their very first act on American soil, that last year, he moved to make California a sanctuary state.

Also, Seeley clearly still maintains some logic, as his reasoning for breaking into the mansion was quite sound: “He’s an open-door policy kind of guy,” he said, “so I figured the door would be unlocked, or else I wouldn’t have ran over there if I thought the door would be locked.”

Makes sense to me! The real outrage here is that he was arrested!

I say we all get together and vote to make Governor Brown’s mansion a sanctuary mansion. I mean, he’s all about letting people with no legal right to be somewhere stay there, why isn’t he giving Seeley a room, some cash, and telling police to go away?

Sure, Seeley broke into the governor’s mansion to protect him from “giant cats” and the wild animals he supposedly saw roaming around town, so he’s probably a little nutty.

But is that really any nuttier than the government of the most populous state in the Union handing out welfare, public education, healthcare, and police protection to millions of foreign nationals who entered the country illegally?