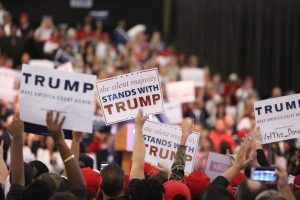 Trump Derangement Syndrome in the public school system is certainly nothing new. That doesn’t make it any less shocking to see the hyper-partisan idiocy at play in the institutions that are meant to be giving our children an education, not socio-political indoctrination.

The left has such an intense hatred for their president and anyone who doesn’t share their hate, even children within the walls of their school aren’t safe from it.

While it’s one thing for teachers, bus drivers, and assorted school employees to have—and even obnoxiously share—their opinions on President Trump, it’s quite another thing entirely to have such opinions presented to children as fact.

That’s exactly what is happening to students across the nation as they crack open By the People: A History of the United States and, as they reach the end of the school year, come to the final section of the book and a startling commentary on the 2016 elections.

In the hotly debated book, students are given a matter-of-fact spin on the leftist rhetoric that has been ramping up ever since Trump won the Republican primaries.

In the section titled, “The Angry Election of 2016,” students are taught that “Most thought that Trump was too extreme a candidate to win the [presidential] nomination, but his extremism, his anti-establishment rhetoric, and, some said, his not very hidden racism connected with a significant number of primary voters.”

Still waiting on clear, in-context evidence of that “not very hidden racism”, y’all. Anyone found it? No? Alright, I’ll keep waiting.

The book proceeds to completely ignore the cultural diversity of Trump’s massive supporter base (which, by the way, would be irrelevant if race wasn’t such a big deal to the left) and caricature Trump supporters as “mostly older, often rural or suburban, and overwhelmingly white.”

Next, the book dismantles the MAGA message and puts its own wildly creative spin on it: “[Hillary] Clinton’s supporters feared that the election had been determined by people who were afraid of a rapidly developing ethnic diversity of the country, discomfort with their candidate’s gender and nostalgia for an earlier time in the nation’s history.”

“They also worried about the mental stability of the president-elect and the anger that he and his supporters brought to the nation,” the textbook added, seeming to completely neglect the generations of leftist oppression that maybe, just maybe, contributed to any “anger” within the Trump camp.

Thankfully, some students whose critical thinking skills haven’t yet been smothered are speaking up against the book. Tarra Snyder, a student at Rosemount High School in Minnesota, shared with Fox News that she was “appalled” by how “blatantly biased” the textbook was toward Trump and his supporters.

“It was really, really surprising to me,” she said. “I really believe that learning should be objective and that students can make their own decisions based on what they’re able to learn in a classroom, and if the facts are skewed then students aren’t able to make well-rounded decisions on what they believe.”

Snyder also noted that, as suspected, the textbook completely glosses over those few Clinton campaign snafus that it doesn’t just omit entirely.

Of course, a spokesperson for Pearson defended the book and the “rigorous peer review to ensure academic integrity” it supposedly underwent:
“This work is designed to convey college-level information to high school students and meet specific Advanced Placement standards. It aims to promote debate and critical thinking by presenting multiple sides of historical issues and offering a broad survey of arguments from the 2016 presidential election and other recent topics. We have reviewed the passages in question independently and in the context of the rest of the book. This review has confirmed that the text offers a broad view of critical arguments from both sides of the 2016 presidential election,” the statement read.
The days of justifying sending our children off to be molded into good little blue-voting citizens at these brainwashing centers are rapidly coming to an end. This, coupled with the ramped up trans-mania attacks on mere biology creeping into public schools, doesn’t bode well for our next generations.