This High School Student Said There Are Only Two Genders, His Teacher Goes Bonkers 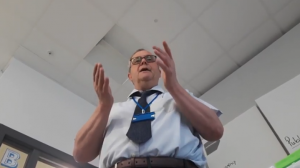 The late 2010s are yielding some pretty wild new ideas and philosophies, but none are quite so crazy as the theory that there is an unlimited number of genders beyond just male and female.

To be sure, gender theory wasn’t invented in the current decade, but until now it had been little more than a thought experiment among academics with way too much free time. Now, if you disagree with someone who claims to be “pangender” (a member of many or all of the bazillion genders these folks have invented), you’d better duck.

A high school student in Scotland, for example, learned the hard way that daring to question modern gender theory simply isn’t warm and lovey and inclusive enough language for the school setting, and that there are some pretty severe consequences for it.

The boy, an anonymous 17-year-old, recorded an incident in his Aberdeenshire-area school in which his teacher has an absolute tizzy fit over his declaration that there are only two genders.

According to a report from The Daily Mail, this particular incident began when the teacher allegedly told the class that a website was “old-fashioned” for having only two gender options available. The teen disagreed and said, biologically speaking, there are only two genders and that anything else is a “personal” identification. That simple statement was all it took to get the boy kicked out of class.

Outside the classroom, the boy secretly recorded his discussion with the teacher in which he was told to keep his opinions in his “own home.”

As if being kicked out of the class and berated wasn’t enough, the student wound up with an incredible three-week suspension for his bold stance on this insanity.

Three weeks, people. All for daring to state a scientific fact. Insane.

Friends of the student told The Daily Mail that he recorded the incident to expose the “dangerous” ideology being plainly presented to students as incontrovertible truth.

“He decided to film the teacher because he wanted to show what was going on in schools today for simply stating there are only two genders,” one friend of the student said. “He has nothing against anyone who identifies as LGBTQ, but completely disagrees that there are more than two genders and that it’s a social construct.”

The teen “believes telling kids that boys are girls and girls are boys is a very dangerous thing and wanted to get his views across to the teacher,” he added. “His view is that scientifically there are only two genders. This new gender theory that there are unlimited genders is something that should be discussed and debated – not just thrown into a class discussion and if you disagree you get kicked out of the room.”