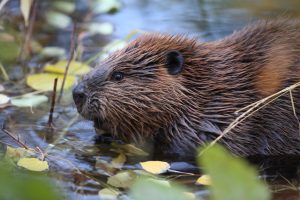 Just when you think we’ve reached peak insanity, someone comes along and does something like this.

Apparently, Britons have a bit of a thing against beavers, says a certain environmentalist in the United Kingdom. That same environmentalist blames the animal animosity on, of all things, C.S. Lewis’ The Chronicles Of Narnia, particularly the first book, The Lion, The Witch, and The Wardrobe.

Now, for some of you, many moons have passed since the last time you read that wonderful story (or watched the crazy animated short in school, or sat in awe of Liam Neeson’s Aslan).

As someone whose army of tiny humans demands that the audiobook be on a constant loop, let me jog your memory: set during the air raids of World War II, four British children are sent to live in the safe, quiet country home of a mysterious professor. They find a clandestine, magical land by entering through the titular wardrobe in a spare room. That land, Narnia, is under the illegitimate, iron-fisted rule of the Witch who shows no mercy in fending off the quasi-messianic Lion in his quest to restore the rightful rulers of Narnia—the children themselves—to their thrones.

So, what does this have to do with beavers? Well, when the children first arrive in Narnia as a group, they’re warmly welcomed by a pair of anthropomorphized beavers. The aptly-named Mr. and Mrs. Beaver invite the children into their cozy home, feed them a hot meal of fish and potatoes, and give them the low-down on Aslan being on the move and whatnot before joining them on their journey.

That’s where all heck breaks loose.

According to researcher Ben Goldfarb, this charming, though obviously fictitious, representation of the noble animal is directly to blame for the unfavorable attitudes Brits have toward beavers.

Goldfarb, an environmental journalist who wrote a book called Eager: The Surprising, Secret Life of Beavers and Why They Matter, made the accusation last weekend at the Hay Festival in Wales.

Real beavers, Goldfarb says, don’t eat fish, and Lewis’ “biologically inaccurate” portrayal is causing Brits to do real harm to efforts to reestablish the species on the island.

“They’re totally herbivorous. That’s one of the funny things about beaver reproduction in the UK: every British schoolchild reads Narnia and they grow up thinking that beavers are going to eat all the fish. That is biologically inaccurate.”

“They have a few species of tree that they most like—that’s willow and the whole poplar family, birch, aspen, cottonwood.”

Goldfarb blamed this dastardly “miseducation” for beavers dying out across the U.K. and claimed that children who grow up thinking beavers eat fish believe they’ll be competing with the beavers for food. When conservation programs talk about re-establishing the British beaver population, he said, folks tremble in fear at the thought of the mass extinction of fish that would surely follow.

“[W]hen [the idea of] beaver reproduction here was first floated, angling groups were among the strongest opponents because they’ve been mis-educated by C.S. Lewis,” Goldfarb stated.

You’ve got to be kiddng me.

Either this dude is grossly exaggerating the reluctance of Britons, or giving Lewis undeserved credit for public stupidity, or else there’s a serious problem here.

Mr. and Mrs. Beaver cooked potatoes, used tools, wore clothes, and essentially ran an Underground Railroad right under the nose of an evil ice witch. None of these humanoid behaviors should give any reader cause to think real beavers might drive up the demand for fishing poles.

Are folks afraid it’ll be “always winter and never Christmas” if beavers come back, too?