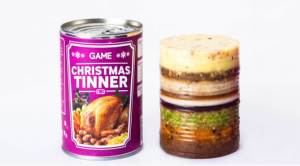 Believe me, I know all too well the stress of whipping up a holiday dinner that is tasty and beautiful. Ask me about the time the turkey I was thawing in the refrigerator leaked all up in the cherry pie on the shelf beneath it. Fun times.

I don’t have the slightest bit of judgment toward individuals or families who don’t make big emotional or financial investments in an Instagram-worthy Christmas dinner table. Heck, my own little family had a three-year stint during which we ate our Christmas dinners at Chinese buffets.

That said, there is a dark, depressing tragedy this Christmas that I simply cannot stay silent about.

There are people eating their entire Christmas dinner out of an [expletive deleted] can.

According to The Sun, Christmas Tinner is a singularly disgusting product offered by GAME, a popular tech retailer, and is marketed toward gamers who refuse to get their [expletive deleted] up and come eat at the table like an [expletive deleted] civilized human being.

The Sun gives the rundown on the can’s components:

If you can stomach it, the meat version has nine layers with the top layer your breakfast of scrambled eggs and bacon, followed by two mushed up mince pies – because everyone needs an 11am snack.

Then there’s the main event; turkey and potatoes, gravy, bread sauce, cranberry sauce, and either Brussels sprout with stuffing or broccoli with stuffing, plus roast carrots and parsnips.

Last but not least, is the bottom layer of Christmas pudding for dessert. 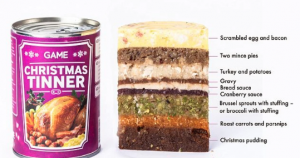 And, for the vegans and vegetarians in your life, GAME has got you covered:

Next you get into the main course of red cabbage, parsnips and carrots, butternut squash, Brussels sprouts and broccoli, peppery vegan pigs in blankets, vegan beef wellington, vegan cheese, olives and grapes, and scrambled tofu and facon (fake bacon).

The veggie version, meanwhile, sees all three courses lumped in all over the place.

What in the name of the Lord’s righteous judgment is this [expletive deleted]?!

The Sun points out that consumers should be aware of the sky-high calories contained in each can (seriously, we’re worried about the calories here?) in case anyone hates themselves enough to actually eat an entire can:

The average man should only consumer around 2,500 calories, while it’s 2,000 for a woman, according to NHS guidelines.

But, hey, it’s 2019. You can just decide to identify as a man if you feel like pigging out, so it’s all good. Except it’s terrible and this shouldn’t exist.