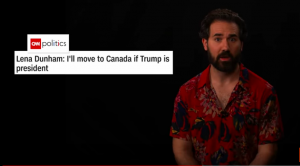 Humor is the anesthesia that makes the surgical removal of faulty logic and brain-melting ideology less painless.

Shout in someone’s face about the error of their ridiculous stance, and they dig in their heels. Get them to laugh about it and, more importantly, you’ll get them to think about it.

When it comes to the issue of illegal immigration, it seems like a pretty open-and-shut case, right? Resources are finite, so massive artificial inflation of the population isn’t going to be sustainable. Drugs and crime are provably the biggest exports of folks who don’t care to follow basic laws when entering a country, so beefing up security is a must. These are basic, simple principles that a preschooler could grasp.

But, obviously, the issue was tainted with bleeding-heart ideology long ago and before we knew it anybody advocating for those common-sense ideas became a hateful bigot in the eyes of the ever-loving left.

For all the good intentions these folks may have, the logic of open borders is untenable. However, as we all know, debate doesn’t work, Facebook comment wars don’t work, and Lord help these people if they ever crack open a book to learn something new.

Comedy to the rescue.

As We the Internet (WTI) hilariously explains, the liberal logic that our president’s common-sense approach to illegal immigration somehow makes him racist, fascist, and “literally Hitler” therefore we need to have totally open borders does not compute:

As “equal-opportunity offenders” who are decidedly unbiased in roasting both liberal and conservatives, WTI did a public service in delivering the kill shot to the oft-regurgitated trope that reduced illegal immigration is Nazism:

The same people who call Trump “Hitler” also want to let in migrants and asylum seekers? They compare turning away asylum seekers at the border to the U.S. turning away Jews before World War II. But wouldn’t the analogy be more like Jewish asylum seekers being sent into the arms of Hitler? Because remember, Donald Trump is just like Hitler. Possibly worse depending on whose tweets you’re reading.

The video also roasts celebrities who have such cushy lives “they have to stage their own hate crimes” who vowed to move to Canada if Trump was elected in 2016. It’s beautiful.

Maybe it’s time to dial down the rhetoric, turn up the comedy, and let the insanity of the left’s talking points speak for itself.