This City Is Fining A Local Business Over $10,000 For Flying Their Massive American Flag, But They Won’t Back Down 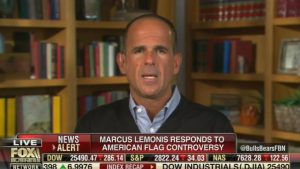 Of course you can. People fight their hilariously corrupt local governments and win all the time. What fatalistic nonsense.

After receiving a notification that the 3,200-square-foot American flag waving over Gander Outdoors, his Statesville, North Carolina RV dealership, is larger than what a city ordinance permits, Lemonis prepared to make a stand.

The 40′ by 80′ flag, the city said in its initial complaint, is significantly larger than the 25′ by 40′ flag the business allegedly sought permission to fly.

That’s just too much freedom for one little city to handle, apparently.

Lemonis reported that the business is being fined $50 for each day the star-spangled banner yet waves, exceeding $10,000 since the flag was first erected in October.

“As I told the city [Statesville], it’s not coming down under any circumstance,” Lemonis declared, saying that flying it is part of his “DNA.”

Lemonis also poked holes in the foundation of the city’s complaint, concerns from the Federal Aviation Administration (FAA) over the hazard an oversized flagpole may pose to low-flying aircraft. If the FAA is concerned about flagpoles, then that’s simply not a valid basis for complaining about the dimensions of the flag itself.

Come what may, Lemonis says he will remain steadfast in keeping the flag up at any cost.