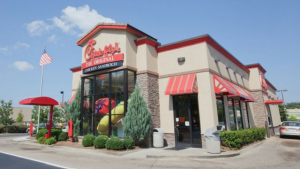 There are so many reasons why it has quickly become the favorite business of the American right, and, much to the chagrin of progressives, one of the most popular and prosperous fast-food chains in the US.

Their chicken sandwiches and excellent customer service alone have catapulted the business to wild success, but the position they’ve taken in the raging culture war seems to have only further fueled their success.

So when a man shared a story on Facebook about how he delivered his own baby in a Chick-fil-A bathroom, the post, naturally, went viral instantly.

When the Falon Griffin’s baby girl decided to make her appearance, she and her husband, Robert, arranged to meet up with friends at a San Antonio Chick-fil-A so their friends could care for their other children as they headed to the hospital.

Falon, in active labor, needed to use the restroom, and since the Chick-fil-A had already closed, she knocked on the door and the ever-accommodating employees allowed her to use the bathroom.

When they heard her screaming in the bathroom, they went outside to get her husband, Robert, who found his wife on the toilet and the baby already crowning.

He tells the rest of the incredible story:

So there we were…..my wife and I in a tiny stall in the bathroom, and I could see the top of our little girls head crowning as maggie was straddling the toilet. I told Maggie, “sweetie, we are gonna have to do this right here, right now”. After shouting to the manager to call 911 and to bring any clean towels, Maggie and I started delivering our baby. When she got to the shoulders, I realized the chord was wrapped around her neck TWICE. didn’t want to alert my wife, so just told her try to relax for a minute and I was somehow able to unwrap the chord from the baby’s neck. With two more strong pushes, and using my shirt for a towel, out came Gracelyn Mae Violet Griffin. Paramedics arrived 15 minutes later so we kept her warm by having the chick fil a staff warm up white towels in the kitchen and keep bringing them to us.

He goes on to explain that little Mae’s birth certificate lists him as the attending physician and the location of her birth as Chick-fil-A.

We definitely have to tip our hats to this brave dad who did an amazing job delivering his little girl!

While the safe delivery of a healthy girl is by far the best part, you’ll love how he finished off his post:

I thinks it’s pretty ironic that a proud conservative, Christian family would have a baby in a Chick-Fil-A, and wrapped in a Trump 2020 T-shirt! BOOM #maga #mywifesthebest #chickfila #texas???????? #chickfilababy