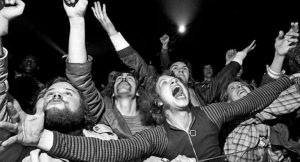 It’s simply titled “2 Americas”, and it sums up exactly why so many people in the US can’t simply enjoy themselves in the midst of not-really-so-bad times.

To be fair, you can’t blame the left for their high levels of stress and their impression that the world is about to end.

After all, they still trust the mainstream media, and as far as legacy news is concerned, the world inches one step closer to total demise every time Trump tweets…or even sneezes.

But it’s sad, really, that they also can’t enjoy the booming economy, a successful presidency who is really, at the end of the day, pretty moderate.

Or the fact that Republicans don’t have it out for them, they just want to be left alone and keep their own paychecks.

It’s not like conservatives are roaming the streets in balaclava masks looking to punch the faces of their ideological opponents, is it?

Here’s the cartoon, from Town Hall: 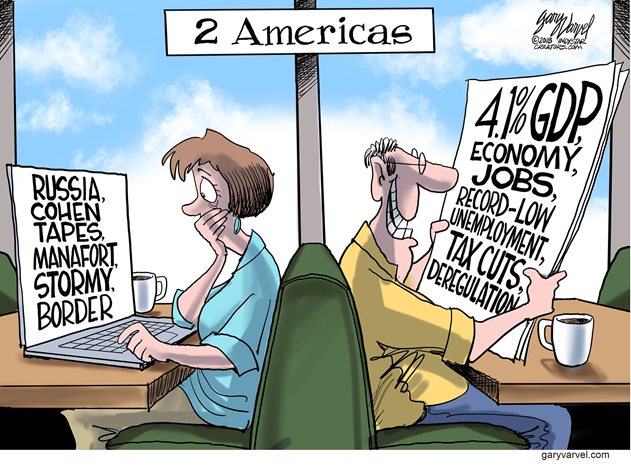 The thing about the conservative agenda which Trump, beneath all the noise, is pretty successfully acting on, is that it’s good for everyone.

Tax cuts, deregulation, a booming economy, and more liberty benefit all Americans, not just the “marginalized” people the causes of which Democrats have been championing for the last few decades.

The thing is, you don’t have to like Trump to enjoy these times. Heck, he’s hilarious, and if leftists still had a sense of humor they could enjoy the plethora of comedic material they’re provided with as they watch their paychecks increase and jobs seemingly appear out of thin air.

But no. They lost their sense of humor as soon as they embraced political correctness, and the two simply can’t co-exist.

So they go on, allowing themselves to be perpetuated by a fear-mongering media that is desperate to materialize any scrap of evidence they can that Trump colluded with Russia.

They’re creating their own reality, and there’s not much that can be done at this point to convince them that things aren’t dire.