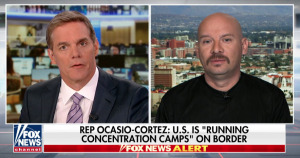 Or, if you’re Alexandria Ocasio-Cortez’ case, call border detention centers “concentration camps,” win a trip to one and get to see firsthand how hilariously wrong you are.

Her exact words, and I quote, were, “They are concentration camps. And, um, if that doesn’t bother you, I don’t, I don’t know, I like, we can have, okay whatever.”

How can you argue with that impeccable logic and wit?

Well, as it turns out, it’s not hard when you actually know what you’re talking about.

“She needs to come down here, I’ll offer to show her myself the area,” Del Cueto told Fox News’ Bill Hemmer in a Tuesday edition of “America’s Newsroom.”

“I want to talk to the people that are concerned enough with humanity to say that ‘Never Again’ means something. The fact that concentrations camps are now an institutionalized practice in the Home of the Free is extraordinarily disturbing, and we need to do something about it.”

“When any individual makes that reference, it loses all interest in me,” Del Cueto added. “It’s disgusting to compare concentration camps to what the men and women are doing here protecting our country.

“She used the extermination of six million people. She used the phrase ‘who are concerned enough with humanity to say that ‘Never Again’ means something,’” Hemmer responded. “Has she ever been to Yad Vashem in Jerusalem? Or Auschwitz-Birkenau in southern Poland? Or Dachau in Germany?”

“‘Never Again’ is the phrase that Jews all over the world use to make sure that the extermination between 1939 and 1945 never happens again, and she’s using concentration camps to describe what’s happening on the southern border,” Hemmer continued.

“Does she not owe every Jew on this planet an apology?” Hemmer asked.

“It’s definitely a slap in the face to a lot of these individuals that actually have family members that went through concentration camps,” Del Cueto said.

Here’s hoping AOC takes Del Cueto up on his offer, but I won’t hold my breath.