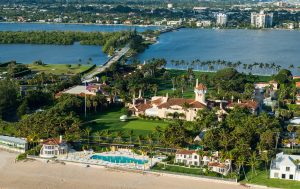 I want to take a minute to encourage each and every Political Cowboy reader to pray for those affected by Hurricane Dorian (especially in The Bahamas, where the Cat. 3 storm is devastating the land and has taken the lives of several people including an 8-year-old child) and, if you are in Dorian’s path, know that I am continually praying for you.

As for the extreme leftist elites, however, we all know how fond they are of “thoughts and prayers” (to be fair, just typing those three words doesn’t do a thing and you probably need to dust off your bible if you think it does).

“As the exact track of Hurricane Dorian is becoming more certain, with a strike along the central Florida Atlantic coast the most probable outcome, the tropical cyclone is likely to unleash torrential rain and raise the risk of flooding after landfall next week,” Accuweather says of the storm. “Following major impact to lives and property due to high winds and coastal flooding, heavy rain and inland flooding may be Dorian’s second wind over the southeastern United States.”

“All indications are it’s going to hit very hard and it’s going to be very big,” President Trump said of Dorian, comparing the coming storm to 1992’s behemoth Hurricane Andrew, which destroyed thousands of homes south of Miami when it made landfall with winds above 165 miles per hour.

So, with that in mind, that’s the sort of thing these psychopaths are politicizing and gleefully cheering on.

After the last three years, the work of a just and righteous God cannot be considered credible evidence of His goodness unless He picks all of Mar-a-lago up by the roots, sails it across half of Florida and heaves it on top of Doral and its every last bedbug. https://t.co/5UblkKzF1c

According to The Daily Wire, Simon referred to his critics as “f***nuts” and doubled-down on his statement even after being ratioed into oblivion.

“F***nuts, we are invoking an omnipotent divinity capable of heaving one Trump sh**hole atop another, destroying the realty and leaving no other soul’s hair mussed. And hey, roaming twitter with a flatlining sense of humor and some manufactured outrage just sucks unwashed a**,” he tweeted.

Simon sees to have been following the lead of Kim Campbell who opted for a simpler statement that she was “rooting for a direct hit on Mar-a-Lago!” 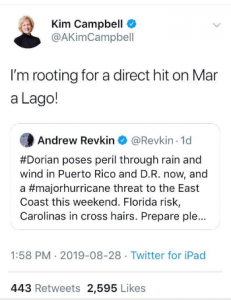 Campbell, unlike Simon, soon deleted her tweet and offered this apology:

I have deleted my tweet about the hurricane & Mar a Lago and sincerely apologize to all it offended. It was intended as sarcasm-not a serious wish of harm. Throwaway lines get a life of their own on Twitter. I shd know better. Mea culpa.

Not long after Campbell’s sick tweet was first written, Grandma’s Boy actor Allen Covert fired back at those demonstrating the unimaginable depths the left has hit:

I’m gonna go ahead and waive Mr. Covert’s swear jar deposit on the grounds that he so succinctly nailed the Trump Derangement Syndrome that has metastasized on the left. Incredible.

Of course, folks like Simon get to play the comedy card when folks inevitably point out that Mar-a-Lago was built to be hurricane-proof. But then you get this kind of reaction:

I’m wondering if post-Dorian headlines out of our favorite fake news sources will harp on the fact that Mar-a-Lago didn’t open its doors to the people of Palm Beach. Because who needs facts when literally Hitler orange man is in office?