This 2020 Dem Wants To “Clean Up” Elections By Giving Voters Free Money… Wait, What?! 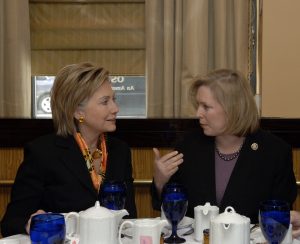 You know what they say, “got a problem? Throw a bunch of taxpayers’ money at it!”

Except, of course, nobody says that because it’s a horrible idea and it invariably fails. Someone needs to let Kirsten Gillibrand know it’s a horrible idea, though, because the New York senator and 2020 hopeful seems to have careened clear off the cliff of sanity end on her latest proposal.

In a plan revealed to the world on Wednesday, Sen. Gillibrand stated that we need to “clean up” our federal election system and make it less reliant on super-wealthy individual and corporate campaign donors.

How does she plan on doing that? Why, give everyone a bucket full of free money, of course!

Gillibrand’s “Democracy Dollars” voucher program would give $600 dollars to every registered voter to be then donated to the candidate of their choice in each House, Senate, and presidential election with a maximum voucher amount of $200 each. The $200, she explained, could also be split between the primary and general elections.

We can change the way Washington works by leveling the playing field of whose voices are heard in our democracy. It starts with getting big money out of our elections, and I have a plan to do just that. pic.twitter.com/bWbJytInEx

In order to participate in the “Democracy Dollars” program and receive these donations, however, candidates must agree to impose a $200-per-donor limit on their campaign contributions. The current law caps campaign donations in the primary and general elections at $2,800 per donor.

“My Clean Elections plan is a critical structural change that gets big money and special interests out of politics,” Gillibrand said of the program’s purpose, “and ensures that elected officials in Washington are beholden only to the people who sent them there.”

“By providing ‘Democracy Dollars’ to eligible voters, and making politicians swear off donations of more than $200 to receive them, we can empower hard-working Americans, and dwarf the power of any billionaire’s Super PAC,” she added.

Of course, Gillibrand seems to miss the obvious problems inherent in taking even more taxpayer dollars—matter of fact, that’s a much more honest name for this program—and, after funneling them through our grubby, inefficient government, putting them directly in the hands of politicians and their cronies.

So, exactly whose Taxpayer Dollars™ will fund this venture? You guessed it, the people Gillibrand and her ilk deem to be far too wealthy. By eliminating the current taxpayer subsidy for the CEOs and special interests whom she contends “currently have an outsized role in our democracy,” folks who are—I am not making this up—”paid excessively high compensation” will be even more heavily taxed to fund this gargantuan plot.

In other words, millionaires. We’ll be taxing millionaires because their earnings are “excessive” and wealth is inherently evil, don’t-cha know.

But, wait, if folks like the 2020 Dems honestly still believe that Russia was able to virtually commandeer our 2016 elections (yes, they still believe that), how do we have any guarantee that our bungling government can safely handle these bajillions of dollars without the same thing happening again? Never fear, Gillibrand’s got your back once more with Strong Anti-Fraud Safeguards™!

Gillibrand assures critics of the program that “strong anti-fraud and anti-corruption measures, including criminal penalties” will totally deter anyone from abusing the system and “ensure that funds are allocated and donated accordingly, and candidates are held to the highest standards” in the use of Taxpayer Dollars™.

Well, that settles it. It’s a sure thing. Now, who will be the first in line to fork over their Taxpayer Dollars™ to Gillibrand for her 2020 bid?