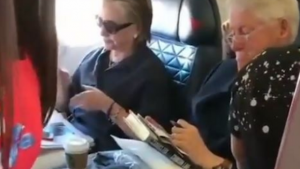 It’s hard to believe that anything the Clintons do is anything other than a carefully planned publicity stunt, especially considering there are rumors floating around that Hillary might just be crazy enough to be considering a third presidential run in 2020.

So when several stunned passengers encountered the former First Couple flying on a commercial Delta flight, it only seemed more likely they were oh-so-casually trying to appear to be “one of the people.”

The Daily Caller, who supposes that the Clintons have simply been faced with the harsh reality of their expulsion from the Washington DC elite, has more details:

Other passengers on the Delta flight snapped photos and videos of the Clintons. In one video, Bill can be seen shaking hands in the terminal as a sunglasses-clad Hillary looks on from the corner. Another shows the two Clintons reading in their seats as other passengers board the plane for takeoff.

One passenger, Kaitlyn Potter, tweeted a selfie of her and Mrs. Clinton, saying, “I guess you could say I’ve had a pretty good start to my internship here in D.C. considering I just ran into the Clintons at the airport *Bill Clinton not pictured* lol.”

In the videos, casual members of the Secret Service can be seen around the Clintons.

It’s hard to believe these people travel so rarely that this is the first time they’ve been on a plane since the election.

So why fly commercial, where they’d surely be seen, now?