And They’ll Know Us By Our Heroes 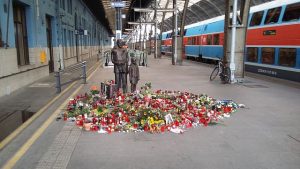 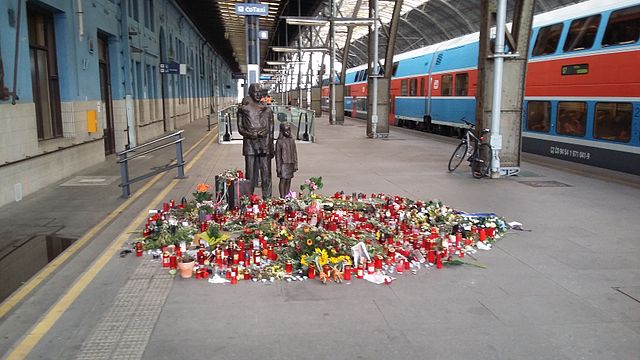 The statue of Sir Nicholas Winton in Prague following his death.

Nicholas Winton was a 29-year-old stock broker in December 1938. As he was preparing to leave for a ski-trip to Switzerland, he received a request for help from a friend. With little thought, he packed away his skis and headed for Czechoslovakia to work in Prague’s refugee camps. No one will ever know how many lives he changed with that decision.

The Munich Accords, an agreement between Nazi Germany and Czechoslovakia, gave the Sudetenland in western Czechoslovakia to Adolf Hitler. Those deemed less than desirable by Nazi standards fled their homes. Many wound up in the Czech capital with only what they could carry during their escape.

When he learned about Kristallnacht, which had occurred several months earlier, Mr. Winton knew things would only get worse. His time in the camps showed him that no one was caring for the children whose families had either fled the Nazis or been targeted by them. He knew someone had to help, and decided he would lead the way.

The first step was to contact governments that might accept large numbers of refugee children. Despite Winton’s best efforts, only Sweden and his native Great Britain agreed. However, His Majesty’s government would require several things to happen before accepting any of Mr. Winton’s immigrants. First, foster families would have to be arranged for each child before they could leave Czechoslovakia. Also, a deposit of £50 had to be paid to the Home Office for each child entering the country. In America today, that would be just over $4,100 per child.

Back in Prague, Mr. Winton set up an office in the dining area of his hotel room and spread the word that he would be taking applications for children seeking shelter in England. Hundreds of parents lined up with their sons and daughters. They knew the Nazi threat was real, but many could barely feed their children. Paying for transportation out of the country was impossible.

Mr. Winton went home and dug in, working at his brokerage firm during the day and raising funds at night. He went to churches and synagogues, advertised in newspapers, and spread pictures of the refugee children throughout Great Britain. Then, despite his conviction that war was imminent and time short, he had to overcome the malaise of his own government. Officials were convinced the Czech government would never let its own children leave the country, especially without their parents, so they had no sense of urgency to process Winton’s requests.

Also, the Refugee Children’s Movement had begun Operation Kindertransport, another, larger rescue effort. They were able to move more than 10,000 children to safety, but that number proved to be just a drop in a large bucket of water. Every bit of help offered was needed.

Finally, on March 14, 1939, Mr. Winton’s efforts paid off. The first group of his rescues arrived by plane to find their foster families waiting. Despite the formidable difficulties he’d already faced, Mr. Winton put much work into making sure each child was matched with a family that would suit their needs and background. And with time running out, he had to work even harder.

The next group and each one after, except for the last transport, left Czechoslovakia by train, then crossed the English Channel by boat, finally arriving at Liverpool Station to meet up with their foster families. The last group of children, scheduled to leave on September 1, 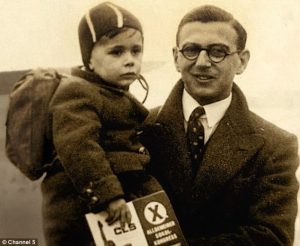 1939, was to have been the largest, but the train never left Prague; the German blitzkrieg came to Czechoslovakia that day. None of the 250 children were heard from again.

When war shut down Mr. Winton’s rescue operation, 669 former refugees – all children – were safe in England, cared for by foster families carefully matched to their needs.

Most people would have gone skiing instead of spending their vacation in a refugee camp. Most of those who did answer the call would have gone home when their vacation time ran out, hoping someone would do something about the tragic situation. Of the few who might have taken action, almost no one would have kept it secret. But that’s just what Nicholas Winton did. Almost fifty years later, in 1988, his wife, Grete, found the scrap book he’d made while searching for something in their attic. It had the name, arrival date, and a picture of each child he’d rescued from the Holocaust.

Mrs. Winton contacted Holocaust historian Dr. Elisabeth Maxwell, who gave the story to her husband, owner of several British newspapers. That led to Winton being asked to attend a taping of the British TV show, That’s Life. During the show, he was shocked to learn the audience was made up of the children he’d rescued so many decades earlier. Many were able to introduce themselves and thank him for saving their lives.

In 1993, Queen Elizabeth made Mr. Winton a Member of the British Empire. President Vaclav Havel awarded him Czechoslovakia’s highest honor, the Order of T.G. Masaryk in 1998. On December 31, 2002, Mr. Winton was knighted by the Queen, becoming Sir Nicholas. He was 106 when he died in 2015.

It’s hard to imagine someone sacrificing so much without seeking some kind of recognition, especially in our world of social media and twenty-four-hour news cycles. We idolize the attention seekers, the narcissists, the addicts, the criminals, and those willing to spit, or even defecate, on the values that created our society. Where might we be if Sir Nicholas Winton and others like him were our heroes, instead? We might find ourselves in a world where Nicholas Winton could spend his vacation skiing in Switzerland.