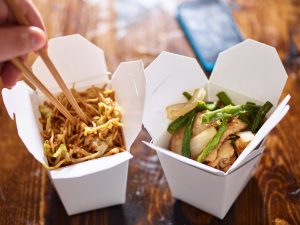 Is anyone keeping track of all the things people aren’t allowed to do or say or think anymore in the Age Of Wokeness? I’ve long since lost count, but add this one to the list: white folks are not allowed to start a Chinese restaurant.

Heck, just to be safe, y’all better not start a restaurant featuring the cuisine of any non-white ethnicity. And, unless you want the Woke Mob on your doorstep, you’d better not make any claims about your food being good, which is the culinary equivalent of white supremacy.

Unfortunately, the owners of Lucky Lee’s in Manhattan found out the hard way just how easy it is to trigger the raging leftist hordes courtesy of a truly insane review in the New York Times.

Arielle Haspel, a health coach, opened up the joint with her husband Lee, for whom the restaurant is named. Their first sin, NYT declares, was giving the eatery a name that “sounded stereotypically Chinese, even though she and her husband, Lee, are not Asian.”

“[Haspel] decorated the restaurant with bamboo and jade touches,” the article continues, “and designed her logo with a chopstick-inspired font.”

Worst of all, the Times continues, Arielle used her “sleek social media presence” to advertise Lucky Lee’s food as a healthier alternative to the “Chinese” food we’re so accustomed to in America.

The lo mein, she said in now-deleted Instagram posts, won’t make you feel “bloated and icky” and nothing on the menu would be “too oily”. While Haspel clearly had her food-sensitive clientele in mind (or simply anyone who has sworn off classic Chinese food for the millionth time after the epic bathroom sagas that ensue), the Times and the woke swarm on Twitter took this to be a blatant statement of the inferiority of food created by actual Asians.

“[A] stream of food writers posted about how Ms. Haspel’s decision to brand her Chinese food as ‘clean’ was dredging up stereotypes that were hurtful to Chinese-Americans, not to mention tone-deaf,” the Times said.

Nevermind the fact that Chinese food in America isn’t even Chinese. Put down that calm, rational thinking and grab your pitchfork!

Now, I’m sure we could walk through the streets of New York and find at least a dozen restaurateurs who, if they were in Lucky Lee’s shoes, would tell the Times and the woke mafia where to go and what to do when they get there. New Yorkers are tough like that. It’s just how we roll.

The Haspels, however, offered a tail-tucked apology for the artificial outrage that is certainly disappointing, but not the least bit surprising:

“We are so sorry. We were never trying to do something against the Chinese community. We thought we were complementing an incredibly important cuisine, in a way that would cater to people that had certain dietary requirement.”

To be fair, the owners of Lucky Lee’s—whose food sounds amazing, side note—don’t need to be dogpiled on even more after withstanding the leftist firestorm. Still, here’s how I might have framed my “apology”:

“Y’all, it’s food. Good food. Inspired by ‘Chinese’ food. Get over yourselves.”

That, and maybe my classic “there are starving children in China, you know” speech.