The Woke Mob Is Going After Woody Guthrie For “This Land Is Your Land.” Unbelievable. 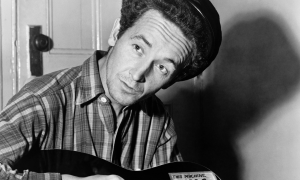 Want to know something?

In 2008, at the ripe old age of 18, I voted in an election for the very first time. For Barack Obama. And, if I recall correctly, I probably voted straight blue for candidates in other offices I knew nothing about, simply because I was a young, brainwashed New York kid who was taught that Republicans were evil. In fact, after a year of college, I was well on my way to becoming a sign-carrying, milkshake-throwing socialist.

It’s funny the things we learn, stop believing, or start believing as folks like me make their way out of the leftist hive minds of public schools in leftist states.

I’m now so far off-the-charts conservative I’d probably make most Republicans uncomfortable, but I go along to get along most of the time. Still, while I now love the liberty I despised as a mindless young leftist, I also still love some of the old trappings of that former life, especially the music.

While I’m an infinitely bigger fan of Pete Seeger, Woody Guthrie’s mark on folk music is indelible. There would be no Bob Dylan—and, therefore, none of a whole lot of those inspired by him—if there wasn’t a Woody Guthrie first.

Unfortunately, I’m fairly certain that we wouldn’t have today’s social justice warriors either had Guthrie, Seeger, the Weavers, and so on been their ideological grandparents.

The dude was a flaming communist, but at the heart of many of his songs is actually the life and liberty cherished in the American heart, not the robbing of it that he was seemingly unaware socialism and communism invariably lead to.

For the modern leftist I’m all too aware I could have become, however, even Guthrie’s radical-for-its-time leftism must now be abandoned, sayeth Folklife, a Smithsonian publication. Particularly, author and Native rights activist Mali Obomsawin says in some 3,000 words, Guthrie’s alternative anthem, “This Land Is Your Land,” must now be disavowed by the enlightened woke set.

“These lyrics shake me up like a soda can every time I hear them. As an activist, folk musician, and songwriter (in Lula Wiles), and recent label-mate of Woody Guthrie on Smithsonian Folkways Recordings,” Obomsawin says, “my social circles tend to worship Guthrie as the father of all musical protest. But as a Native person, I believe ‘This Land Is Your Land’ falls flat.”

Although Guthrie began writing the song back in 1940 as a sort of an atheistic anti-“God Bless America,” the OG “woke” anthem just ain’t woke enough anymore because, you know, “this land” was stolen from Native Americans.

“In the context of America, a nation-state built by settler colonialism, Woody Guthrie’s protest anthem exemplifies the particular blind spot that Americans have in regard to Natives: American patriotism erases us, even if it comes in the form of a leftist protest song,” Obomsawin continues.

“This land ‘was’ our land,” she declares. “Through genocide, broken treaties, and a legal system created by and for the colonial interest, this land ‘became’ American land. But to question the legitimacy of American land control today instantly makes one the most radical person in the room–even in leftist circles. And because Indigenous critiques of this country are so fundamental, our voices are often marginalized to the point of invisibility.”

Ohhh, boy. Somebody please get this girl a copy of this book. She’s been reading too much Zinn.

Of course, Obomsawain at least has the decency to give Guthrie a little more leniency. After all, he came from a time where white supremacy was so thoroughly ingrained in the mind that he would have every right to claim ignorance.

How kind of her.

“By critiquing ‘This Land Is Your Land,’ I don’t mean to imply that Guthrie himself promoted conquest, but the song is indicative of American leftists’ role in Native invisibility,” Obomsawin says, “The lyrics as they are embraced today evoke Manifest Destiny and expansionism (‘this land was made for you and me’). When sung as a political act, the gathering or demonstration is infused with anti-Nativism and reinforces the blind spot.”

Oy. How do these people not walk into more telephone poles when they’re so busy watching out for racism, overt or covert, everywhere?