The White House Has Responded to #Laurel vs. #Yanny, And It’s Amazing 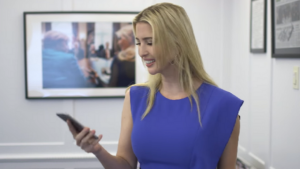 This is exactly what got Trump elected, folks.

And also exactly why everyone is sick of the mainstream media.

So unless you’ve been living under a rock…or rather, simply haven’t logged on to a social media network this week, the internet has been taken over by a short, 15 sec sound clip repeating a word.

Here’s the question, though, is it “Laurel” or “Yanny”? Some people clearly hear “Laurel” and some hear “Yanny” and it’s caused the biggest stir on the internet since the infamous dress of 2015, or, one could say, since Donald Trump decided to run for President.

Well, the Trump White House decided, very cleverly, to weigh in on the debate, and it’s hilarious.

The video stops by several White House officials and staffers, asking them what they hear. Ivanka clearly hears “Laurel”, and so does Kellyanne, although, she says, “I can deflect and divert towards Yanny if you need me to.”

Sarah Huckabee Sanders is told news is going around that she hears “Laurel”, which she says must be from CNN because it’s “fake news, all I hear is ‘Yanny'”.

The question makes it all the way up to The Donald himself, who says “all I hear is ‘covfefe'”. LOL!

We’re not sure whose idea this was, but it was a great one, and very smart of the Trump administration to weigh in on such a wildfire social media trend in such a fun, funny way, making fun of themselves as well.

So of course…the mainstream media is bawling their eyes out.

Because apparently, nothing can be fun anymore. This is why we can’t have nice things.

That’s the joke, you rubes.

Trump White House Kills Off Yanny-Laurel Debate With ‘Ridiculous’ Clip is how HuffPo decided to spin it, sharing tweets from triggered snowflakes who suggested the White House has better things to do.

All you suckers would be complaining if the Trump administration was working too, you complain no matter what, and you’re just upset they did something funny and fun that we can all laugh at together.

Once again…this is why he got elected. Because everyone is tired of politically correct stick-in-the-muds who can’t take a joke.