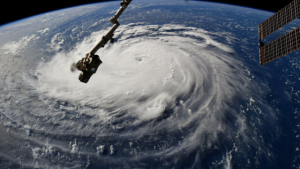 If every law-abiding gun-owning member of the NRA is directly responsible for school shootings, then every climate change skeptic is literally causing hurricanes.

No, seriously, that’s the rhetoric.

If you are, my friends, a climate change skeptic, then you are complicit in Hurricane Florence. You better hope for the sake of the million-some-odd people who are currently in the path of the storm that everyone is safe or it’s on you, mister!

Now, since it’s 2018, this also directly applies to the Grand Scapegoat of All Time, Donald “Literally Responsible for Everything Bad Literally Ever” Trump.

At least, this is what an op-ed in the Washington Post this week declared, because of course it did, as the Daily Wire reports:

Noting that Florence, a Category 4 hurricane, will be the strongest hurricane to ever hit the East Coast so far north if it comes inland, the Post opined, “ … when it comes to extreme weather, Mr. Trump is complicit. He plays down humans’ role in increasing the risks, and he continues to dismantle efforts to address those risks.”

The Post then quoted a climate researcher who posited of Hurricane Harvey, “Harvey could not have produced so much rain without human-induced climate change.” The op-ed continued. “Now Florence is feasting on warm Atlantic Ocean water.”

The Post concludes, “The president has cemented the GOP’s legacy as one of reaction and reality denial. Sadly, few in his party appear to care.”

So….let me get this straight.

If Trump had stayed in the Paris Climate Accords, hurricane season on the East Coast would have just disappeared?

That somehow the 0.2 degrees Celsius of warming that would have been averted by the turn of the century as a result of the accord would have reduced Hurrican Florence to a mere drizzle?

Maybe we’d take the claims of climate alarmists a little more seriously if they didn’t make ridiculous claims like this.