‘The View’ Digs up Dirt on Tomi Lahren’s Family History to Use in Attack on Immigration, Her Response is Explosive 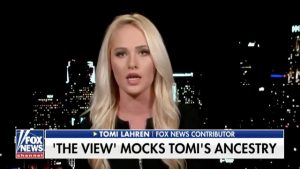 Fox News contributor Tomi Lahren fired back at one of the hosts of “The View” after they went digging into her family ancestry to try coming up with something they could use for a strange attack on her concerning the issue of immigration.

Lahren had a good laugh at the show’s expense after they went through all this trouble only to discover that her family migrated to America legally and even suggested they spend more time on Sen. Elizabeth Warren’s ancestry next.

For those who don’t get the joke, if you remember back awhile, Warren claimed to be Native American, which isn’t exactly true.

“What she found was really shocking, guys,” started Lahren, speaking of “View” cohost Sunny Hostin. “She found that my family who came there, in the 1800s, from Norway and Germany, that they spoke Norwegian and German. Really what she did is prove that my family came here legally.”

“I really am happy though that she has such a fascination with my family history, and I’m hoping that she’ll take on Elizabeth Warren’s next,” quipped Lahren, seemingly directing the comment at Mendelsohn.

On Monday’s show, Hostin gleefully read from the ancestry report. “What’s interesting is, someone did do some research on Tomi Lahren’s family, and I have it in front of me,” she said in a mocking tone. “Her second great grandmother had been here for ten years yet spoke no English. Oh my gosh. Her great grandfather’s 1885 baptism, recorded only in Norwegian because they didn’t speak any English. The 1930 census says Tomi’s three times great grandmother had been here for 41 years and still spoke German. She didn’t speak English either.”

.@TomiLahren hits back after ‘The View’ hosts mock her ancestry: “Take on Elizabeth Warren’s next” pic.twitter.com/Sp6mh7dtlq

If only the media spent as much time on gathering the facts for the issues that actually impact average, every day Americans, perhaps folks would have a clue what’s really happening in their country and take proper action.