“The View” Co-Hosts Gush About “Scandal-Free” Obama Admin. Let’s Remind Them About the Scandals. 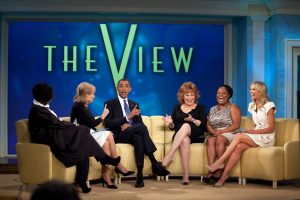 President Barack Obama records an episode of The View at ABC Studios in New York, N.Y., July 28, 2010. Pictured, from left, are Whoopi Goldberg, Barbara Walters, Joy Behar, Sherri Shepherd, and Elisabeth Hasselbeck. (Official White House Photo by Pete Souza) This official White House photograph is being made available only for publication by news organizations and/or for personal use printing by the subject(s) of the photograph. The photograph may not be manipulated in any way and may not be used in commercial or political materials, advertisements, emails, products, promotions that in any way suggests approval or endorsement of the President, the First Family, or the White House.

Obama loves to brag about how scandal-free his administration was, and his adoring admirers clearly buy the line hook, line, and sinker, and assume that you have too.

To be fair, it could be argued that for there to be a scandal, there needs to be a media establishment that doesn’t in fact clap their hands over their ears and loudly profess that “la la la I can’t hear you la la la” whenever you accidentally give a bunch of firearms to Mexican cartels or your Secretary of State deletes tens of thousands of emails off her private email server.

Relentlessly covered for by a fawning and complicit media the Obama administration was, but scandal-free it most certainly was not.

So much so that when some of the more notoriously left-wing co-hosts of “The View” asserted as much in an effort to (what else) slam Trump, quasi-conservative co-host Meghan McCain literally burst out laughing.

“My issue is the hypocrisy right now,” lamented co-host Abby Huntsman on Tuesday’s airing of the ABC talk show, about Trump not being impeached yet (or something.)

“I hate hypocrisy in politics and if this were on the other foot, if this were the Obama Administration, and there were 25 officials that had been denied, or that had been, said, ‘We have concerns,’ and they still got overridden, this would be the top issue right now for every Republican in the country. And it should be for every single American.”

Joy Behar interjected, “None of this happened—I remember when people say, ‘This was Obama.’ Nothing like this, even remotely close, ever happened in the Obama Administration. Completely scandal-free.”

It was at this point that McCain cracked up, to which Behar challenged, “Can you name a scandal?”

“Yes, but I don’t want to do this with you this morning,” McCain replied at first. When pushed further, however, she said, “The Iran deal. Number one. I mean, billions of dollars in unmarked bills in the middle of the night given to Iran. Yeah, that’s a big scandal.”

Undeterred by mere facts, Ana Navarro referred to what the left believes are the only scandals of the Obama administration, “I’ll give you an Obama scandal. He wore a tan suit. Michelle showed her arms. And he ate Grey Poupon!”

What part of “billions of dollars in unmarked bills in the middle of the night” did she miss?

Some of the Obama administration’s greatest hits include:

If that’s “scandal-free,” then Trump is a unifying political figure.