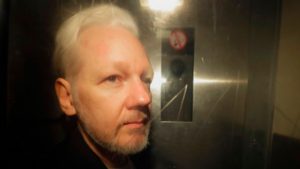 The United States has finally submitted a formal request to the United Kingdom to have Julian Assange extradited to America in order to face charges for conspiracy and mishandling false information.

Everyone’s favorite mainstream media news outlet, CNN, stated that the U.S. barely made the June 10 deadline to get the paperwork for this request turned in, which was likely a strategy on behalf of the American government to keep the conditions of the extradition under wraps for as long as possible.

For now, Assange, if he were to be sent to the United States as opposed to any of the other countries requesting extradition, including Sweden, which has an open warrant for Assange on a sexual assault case, would stand trial on one charge of “computer intrusion” and at least 17 additional charges of “encouraging, receiving and publishing national defense information in concert with former Army intelligence analyst Chelsea Manning.”

If the request is granted, prosecutors would be limited to those 18 counts, meaning that the United States is choosing to go after Assange only for his collaboration with the former Bradley Manning, who broke into classified U.S. military files and stole thousands of documents Manning believed would convince Americans to put an end to the Iraq War, apparently as part of a revenge plot for the military’s “Don’t Ask, Don’t Tell” policy.

Assange accepted and published Manning’s material, which included audio and video files and, according to the charging documents, encouraged Manning to find more classified material. The U.S. government says Assange’s actions bypassed the First Amendment’s guarantee of freedom of the press because he openly assisted Manning in committing a criminal act (hacking into the classified files).

Manning, of course, was convicted of espionage for the same event and served several years in prison before being granted leniency by then-President Barack Obama. Manning is now in prison again, being held on contempt of court charges for refusing to testify in front the grand jury that ultimately issued the additional counts against Julian Assange.

It’s looking likely that Assange will indeed be extradited to America. Wikileaks has tried to appeal to the United Nations and have them involved in all of this, but they have refused, allowing Assange to be held accountable for his actions.

Things were rough for Assange before, but it looks like his life is about to get even harder if that’s possible.