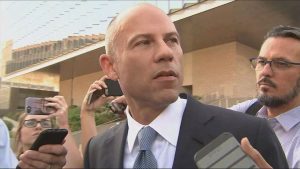 In case you missed it, let me fill you in on the most beautiful, delightful story of the week:

“Women’s champion” Michael Avenatti, the insufferable attorney for Stormy Daniels and that crazy chick who accused Brett Kavanaugh of gang rape who has basically spent the entire year in CNN’s green room, was arrested yesterday for domestic abuse.

It’s not the domestic abuse that’s beautiful. No, domestic abuse is horrible and any man who strikes a woman no longer deserves to be called a “man” (although Avenatti may already have relinquished that title).

It’s that Michael Avenatti has been banging the drum of the “believe all women” narrative for months now and HE’S CLAIMING THE CHICK MADE IT UP.

How do you like them “believe all women now”, Avenatti?

Now, now, certainly, Avenatti is innocent until proven guilty, because, although he and his cohorts on the left will try to convince you otherwise, this is still America and every man, and woman, still has constitutional rights. No one gets a free pass to accuse whomever they want simply because of their gender.

But that’s not what Michael Avenatti tells us, hence the reason I simply can’t get enough of how awesome this story is.

The beautiful irony did not escape the notice of Donald Trump Jr., who, you may remember, Avenatti hilariously challenged to an MMA fight last month.

He took to Twitter to point out the many levels of irony in Avenatti’s arrest:

First, no one can fail to mention the parallel to the Kavanaugh accusations, which Trump retweeted from Newsmax’s John Cardillo. Avenatti had tweeted a statement in his own defense that sounded strikingly similar to Kavanaugh’s own denial of the accusations leveled against him:

.@MichaelAvenatti, when Brett Kavanaugh issued a similar denial about 35 year old allegations you presented with no evidence, you tried even harder to destroy his life.

Your case is days old with a complaining victim displaying physical injuries.

Let’s play by your rules. https://t.co/lXihevsBPo

Next, Trump shared the TMZ coverage of Avenatti’s arrest, making sure to note this is a potential “Democratic presidential candidate” we’re talking about (oh yeah, Avenatti has also threatened to run for President):

Next, Trump made sure to point out just how cozy Avenatti has been with everyone’s favorite fake news network:

Avenatti has been on CNN 100+ times in recent months.

This is why no one trusts CNN. https://t.co/OFEvXH0VKS

Radio host Doc Thompson often refers to Michael Avenatti as the gift that just keeps giving, and he couldn’t be more correct.

I certainly hope if he committed an actual crime, he’s held accountable. But it certainly would be a shame to see him duck away from the public eye because when he worms his way back in it, it’s always hilarious.

Fortunately, I don’t think we’re in danger of being spared his public appearances any time soon.