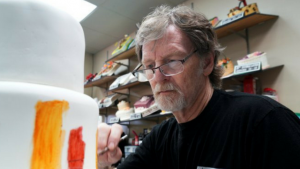 When the news first broke that the Supreme Court of the United States had ruled in favor of Jack Philips, the devout Christian man who kindly and politely declined to bake a cake for a homosexual couple, many were elated.

But upon examining the ruling itself, it quickly became clear that the ruling was a victory–but mostly for Jack Philips.

We should definitely thank the good Lord that Philips’ battle has been fought and won. He has lost every single case leading up to this point since legal action was first brought against his business by David Mullins and Charlie Craig.

If you believe in the First Amendment, that people of faith cannot be compelled to violate their faith by the government, you’ve got to appreciate what a great joy it is for Philips to have gained his victory in court today.

But the First Amendment didn’t gain a victory.

In fact, this just paves the way for the issue to come right back up to the Supreme Court once again, with a fair chance the ruling would be very, very different.

“Whatever the confluence of speech and free exercise principles might be in some cases, the Colorado Civil Rights Commission’s consideration of this case was inconsistent with the State’s obligation of religious neutrality,” wrote Justice Kennedy, the author of the decision. “The reason and motive for the baker’s refusal were based on his sincere religious beliefs and convictions.”

In other words, the Colorado Civil Rights Commission, who originally ruled against Philips when the case was brought before them, was not neutral in their decision to punish Philips for violating the state’s anti-discrimination laws.

In other words, the Colorado Civil Rights Commission, who had originally ruled that Philips had violated the state’s anti-discrimination laws, was clearly biased towards Philips’ faith in their ruling.

So, that means that had they been more neutral towards his faith they may have still ruled against him fairly and SCOTUS would have upheld their decision.

Kennedy also states that the issue of Christians being compelled to participate in events they disagree with ideologically will have to be settled on another day.

“The outcome of cases like this in other circumstances must await further elaboration in the courts, all in the context of recognizing that these disputes must be resolved with tolerance, without undue disrespect to sincere religious beliefs, and without subjecting gay persons to indignities when they seek goods and services in an open market,” wrote Kennedy.

That last part–“without subjecting gay persons to indignities”–should scare you. Not because you’re a jerk and you want gay persons, or anyone, to be subject to indignities, but because it suggests that the right to dignity is recognized by the Constitution.

Like it or not, our Constitution recognizes, in the First Amendment, that “Congress shall make no law respecting an establishment of religion, or prohibiting the free exercise thereof.”

It might offend people, hurt them, or make them feel indignant or undignified when anyone practices their religion, but unless it threatens their sacred rights, the First Amendment guarantees us the right to do it. Period.

We may still have a long road ahead until the court of man recognizes our God-given rights.