The Senate Has Confirmed Antony Blinken As Secretary Of State 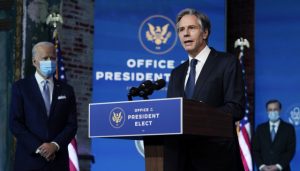 The Senate has approved President Joe Biden’s pick to lead the State Department, Anthony Blinken, in a fast-tracked vote that fill in the top spots for his national security team.

Can’t wait to see what disasters this guy brings to the table, about you?

He is expected to begin work immediately as the new administration faces a number of global challenges, including an Iran that has shown signs of moving ahead with its nuclear arms program while causing trouble in the Middle East; an increasingly aggressive and defiant China; and a Russian president in Vladimir Putin who has shown continued willingness to attack the United States through cyberspace and protesters at home with police batons or self-ordered prison sentences. But the list does not end there, and Biden’s top diplomat will be his point man around the world as the president tries to bring about the “unity” he says is needed at home while also trying to enact his ambitious left-leaning agenda.

The chamber cleared the 51 votes needed to make Blinken the country’s 71st secretary of state during a midday vote that was expected to close with an overwhelming number of its 100 senators voting to confirm him. Though some Republicans raised concerns about his views, Blinken received ample bipartisan praise – a break from the combative Barack Obama and Donald Trump years.

“Confirming Mr. Blinken is not just about the nominee himself,” incoming Senate Foreign Relations Chairman Bob Menendez, who shepherded the Blinken nomination through the process, said this week prior to the vote. “It’s about doing what the American people expect and that the Constitution requires – providing advice and consent to ensure that national security officials are in office in a timely matter.”

Blinken is well-known in the Senate thanks to his work with the Foreign Relations Committee staff director under Biden during his time as a senator for the state of Delaware.