The Revisionists Strike Again: Murals Of George Washington To Be Removed From SF High School 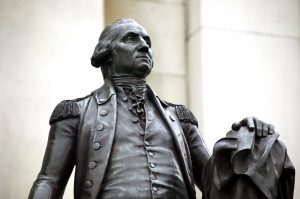 If there’s any single medium used by the human mind to convey ideas that is the most frequently and grossly misunderstood, it’s visual art.

Especially when artists seek to depict sensitive, possibly inflammatory, but very real events, some folks just don’t have the stomach to face that reality, and the inevitable result is censorship.

Historical artwork, especially thoroughly detailed murals, can be a tremendously valuable educational tool when created with high fidelity to the events which inspired it. Though hilariously lampooned in modern media, these works of art are almost like a living picture book for people who take a moment to stop and examine them.

But, then, they might come away from that moment with a deeper appreciation for historical context and a more well-rounded view of eras vastly different from the one in which they live. And that would just be a tragedy.

A high school in San Francisco is seeking to end a nearly nine-decade-long era of such assault on the eyes and minds of its students who are subjected daily to the triggering visage of the life of one of history’s most infamous characters: President George Washington.

A San Francisco mural has become the latest high-profile target of self-appointed censors who want to erase both history and art of which they disapprove. “Life of Washington,” a Works Progress Administration epic depicting scenes of America’s first president across 1,600 square feet, has been on display at a local school since 1936. Yet local activists and bureaucrats have decided its time has gone.

According to a local blog for San Fran’s Richmond district, any artistic or educational value the murals may have is completely negated by the fact that some students are “traumatized” by it.

To see the artwork deemed so terrifying that these precious little minds can’t bear to be exposed to it, click here. Try not to hurt yourself when you scratch your head and wonder why anyone would be offended at a realistic portrayal of history.

In one mural, entitled “Mount Vernon”, George Washington appears to be in conversation with another Caucasian man who gestures towards a seated African-American man holding corn, presumably a slave. In other parts of the mural, African-Americans are engaged in acts of manual labor like hauling large bales of hay and picking cotton in the fields, while Caucasian men are also laboring at other tasks with tools. Washington’s servant, who is pictured holding his horse, is also African-American. The mural is a clear depiction of slavery in the United States, and of George Washington as a slave owner.

The second panel, entitled ‘Westward Vision”, depicts Benjamin Franklin and other founding fathers looking at George Washington as he points off in the distance, while he points with his other hand to a map. On the right side of the mural, as if carrying out Washington’s call for westward expansion, frontiersmen, depicted in greyscale unlike other figures in the mural, stand over the dead body of a Native American man, signifying the genocide of Native American life and culture.

In the bottom right of the “Westward Vision” panel, a frontiersman and Native American chief sit at a campfire smoking a peace pipe. On the ground at the chief’s feet is a tomahawk, symbolizing the disarming of Native tribes. Directly above the Chief’s headdress is a broken tree limb representing broken treaties made by the U.S. government with Native Americans, and broken promises made by settlers.

Not surprisingly, the murals first came under fire back in the 1960s, but past attempts to destroy the work of Russian-American painter and art professor Victor Arnautoff were held off. Now, the artwork’s future isn’t looking so bright.

Laura Dudnick, spokeswoman for the San Francisco Unified School District [SFUSD], told The College Fix that SFUSD held several public meetings for a “Reflection and Action Working Group” to, well, reflect on the murals and decide on a course of action.

“At its conclusion the group voted and the majority recommended that the ‘Life of Washington’ mural be archived and removed because the mural does not represent SFUSD values,” she reported.

How tragic, yet unsurprising, that nuance of thought is so absent from the minds of these folks that they can’t weigh artist’s intent and subtext in their woke inquisition.

“[Arnautoff] included those images not to glorify Washington, but rather to provoke a nuanced evaluation of his legacy,” the Wall Street Journal’s Fergus M. Bordewich contended. “The scene with the dead Native American, for instance, calls attention to the price of ‘manifest destiny,’” Bordewich adds. “Arnautoff’s murals also portray the slaves with humanity and the several live Indians as vigorous and manly.”

I can’t help but wonder if the murals would come under similar scrutiny if the murals didn’t depict any African slaves or Native Americans at all? Perhaps white indentured servants or American loyalists? Or, in that case, would the outcry instead be against a lack of representation of people of color in “whitewashed” history?

Who knows, but here’s hoping Arnautoff’s work is treated with respect and isn’t whitewashed and plastered over with some artificially diverse “kumbaya” monstrosity.