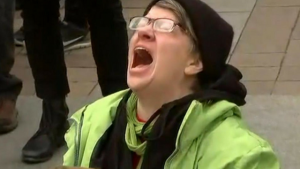 It’s funny how sometimes, the left doesn’t need to twist anything the right does or says: they just repeat it. Because they’re horrified by conservative ideals.

This phenomenon was in full force on Twitter last night as liberals scrutinized the judicial history of Judge Brett Kavanaugh, Trump’s pick to replace Justice Anthony Kennedy on the Supreme Court.

If you’re a red-blooded American patriot who loves liberty and life, you’ll be delighted by some of the facts the left was sharing in an attempt to get their followers to freak out with them over Kavanaugh’s nomination to the Court.

Here are some of the best examples:

It's clear our constitutional right to access abortion is on the line. You don't even need to take our word for it. ⬇️ #SCOTUS pic.twitter.com/QyimJjSmLm

Brett Kavanaugh is a true Second Amendment radical. He believes assault weapon bans are unconstitutional, a position way out of the judicial mainstream, far to the right of even late Justice Scalia.

Kavanaugh thinks an “assault” weapon ban is unconstitutional? That’s my kind of “radical”!

It took me a minute to put together that this was not, in fact, and endorsement of Kavanaugh.

I don’t know about you, but I am feeling pretty good about this pick! Of course, I don’t have Ben Shapiro’s problems:

I can't stop it from overflowing! WHAT DO I DO?! pic.twitter.com/iKjU8V5Vef