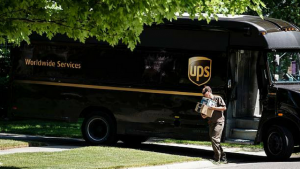 No matter how advanced human civilization gets, the moment a wild animal makes its appearance, we jump right back into the stone age.

At least, that’s what happened to a North Carolina UPS driver recently, who was in the process of delivering a package to an Ashville woman and encountered an unusual obstacle.

Following UPS protocol, he was kind enough to leave enough explaining why he was unable to deliver the package, and the three-word reason inspired the woman to take a photo and post to Facebook, causing it to go viral.

So, what was the reason, you may ask?

Too funny- Marcy got this note in her mailbox from UPS. Since she posted about it on Friday, it’s gotten nearly 2,000 shares 🐻#OnlyInAsheville @WLOS_13 pic.twitter.com/A1aASsGNbH

Marcy Lanier posted a picture Friday of a note that her UPS driver left in her mailbox, with an unusual explanation for why her package wasn’t left on the doorstep.

Apparently a lot of other people thought so, too because it’s been shared thousands of times, all over the U.S.

A lot of people–including us–had the same question when the post started picking up steam on social media over the weekend—how did the UPS driver get past the bear to deliver the note, and why wouldn’t they just drop off the package if they did?

Lanier says her mailbox is at the top of the driveway. “On the street. We get bears all the time,” she said.

Now I’m waiting for the story about a UPS driver’s encounter with a tiger in Texas.