The President’s Companions Are the… 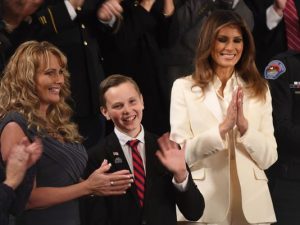 Aesop wrote about a man who wanted to buy an ass. He went to market and, coming across

a likely-looking beast, arranged with the owner that he should be allowed to take him home on trial to see what he was like. Upon reaching home, the man put the animal into his stable along with the other asses. The newcomer took a look round and immediately chose a place

next to the laziest and greediest ass in the stable. When the master saw this, he put a halter on him at once, led him off, and handed the ass over to his owner again.

The latter was a good deal surprised to see them back so soon, and said, “Why, do you mean to say you have tested him already?”

“I don’t want to put him through any more tests,” replied the man. “I could see what sort of beast he is from the companion he chose for himself.”

President Trump delivered his first State of the Union address last night. His speech was powerful. His delivery was masterful. His vision for America was clear and precisely stated. In reality, however, we didn’t learn anything new from the President’s speech. We know where he stands on issues. We know where he’s taking America.

Watching Congressional Democrats react – and fail to react – to the President’s words taught us more than the eloquent words did. They sat through the President’s recognition of veterans. They sat when he discussed showing proper respect for our national anthem. Members of the Congressional Black Caucus sat staring at their phones when President Trump said that unemployment among black and Hispanic Americans is at an all-time low. In fact, the Democrats – the ones who didn’t childishly boycott the event – sat through the entire speech.

Where we really learn about the difference between the President’s vision of America and what those who sit on the left side of the House and Senate chambers want to accomplish, however, is the list of those invited to attend last night’s annual gathering of the three branches of our government. While some Democrats brought victims of sexual assault and #metoo activists, many of their guests were from the group they’ve labeled Dreamers. In other words, they elected to invite citizens of a foreign country who are here illegally instead of Americans – whether native born or some of the many who loved our nation enough to become naturalized citizens.

Two notable exceptions were Congressman Joe Kennedy of Massachusetts and Congressman Jared Huffman of California. Kennedy, who later gave the Democratic response to the President’s speech, brought Staff Sergeant Patricia King of the United States Army, while Huffman invited United States Marine Corps veteran Lynda Bengtsson-Davis. The invitations were not issued, however, because of their military service. Both are transgendered and were present to protest the President’s actions concerning transgenders in the military.

The President and First Lady took a different approach to selecting their guests. Earlier in the day, Mrs. Trump tweeted, “I will be joined tonight by an honorable group of Americans. Sitting with me are heroes who have served our nation in times of need, families who have suffered at the hands of evil, and citizens who have embraced the American dream.”

Corporal Matthew Bradford, USMC, lost his legs and his eyesight to and IED in Iraq in 2007. In 2010, he became the first blind, double amputee Marine ever to re-enlist. He said he hoped to pave the way for those who wanted to continue to serve but thought they couldn’t. David Dahlberg of the U.S. Forest Service saved sixty-two children and staff members when their camp was surrounded by flames during last year’s California wildfires.

Despite being shot twice in the line of duty, Officer Ryan Holets of the Albuquerque Police Department agreed on the spot to adopt a drug addict’s child when he found the pregnant woman about to shoot up in an alley. The woman calls him her guardian angel.

CJ Martinez, a veteran of the United States Air Force, is now and ICE agent. He is responsible for more the arrests of more than one hundred MS-13 gang members. In fact, gang leaders ordered his immediate assassination. He’s still working to keep American citizens safe, however, saying, “We’re just tougher than they are.”

Cory Adams is a welder in Dayton, Ohio. He and his wife just bought their first house. They plan to put the extra money they’ll see from the recently passed tax reform bill into their daughters’ college funds.

Eleven-year-old Preston Sharp started the Flower and Flag Challenge after visiting his grandfather’s grave. His goal is to honor every U.S. veteran. To date, the Challenge has placed more than 40,000 flags and flowers on the graves of those who have served our nation.

Other guests included small business owners, those who have suffered because of the previous administration’s disregard of the rule of law, and heroes who risked their lives to save others.

President Trump rocked the nation last night with a speech millions of Americans have waited a decade or more to hear. His words inspired us, and he demonstrated his vision for our future with his choice of companions. Likewise, Congressional Democrats’ choices of companions showed us exactly what the left thinks of America.

What we do with that knowledge is up to us.