The President Can’t Do That! 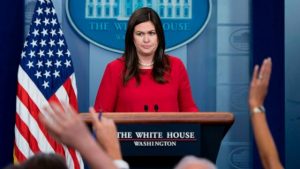 In a surprise Tweet yesterday, President Donald Trump pledged to commit the full might of the federal government to eliminating cancer, heart disease, and diabetes by the end of the decade. He also laid out a plan that will give all Americans access to the drugs at no cost. Chaos reigned in the White House briefing room the next morning when Sarah Huckabee Sanders opened the floor for questions. Ever intrepid and resourceful, CNN’s White House correspondent Jim Acosta stood on his chair and silenced the melee when he demanded, “We have methods to treat these diseases. Why isn’t the President focused on teaching his wife how to dress herself?” Sanders had no response.

While the measure has found some support in Washington, many question whether the average American will be willing to accept a cure resulting from this President’s policies. House Republicans promised lukewarm support to President Trump’s initiative as long as Democrats allow it. Otherwise, according to Speaker Paul Ryan, “President Trump will find himself alone in the wilderness. He has to learn that nothing worthwhile can be achieved by putting America and Americans ahead of each Congressperson’s and Senator’s individual political and social agendas.”

And, indeed, things don’t look good for the plan. On the Senate floor, Minority Leader Chuck Shumer blasted the President for his cruel and irresponsible behavior. “Republican Presidents,” Shumer said, “have no authority to undertake any initiatives without Democrat approval. The Constitution clearly limits Presidents of the opposite party from threatening us like this. It’s clear he doesn’t have even a basic understanding of economics. By putting his own agenda over ours, President Trump has single handedly insured that hundreds of thousands of researchers, medical personnel, and other caregivers will be put out of work. Can you imagine the grief these poor people’s children will feel when they wake up Christmas morning to find nothing under the tree?” He concluded by saying, “We now know that the Grinch isn’t some green ogre-like creature. He’s a monster with orange hair.”

Not to be outdone in self-righteous outrage, House Minority Leader Nancy Pelosi spoke to reporters from her office on Capitol Hill. “It’s just unconscionable,” she cried. “Once again, President Trump has shown how racist and homophobic he is by putting this money toward curing diseases that affect all Americans instead of focusing just on ailments that affect African-Americans and the LGBQTKLMNOP community specifically. This is just un-American, and we won’t stand for it.”

When asked for comments, Hillary Clinton used the airtime to once again deny any responsibility for her November loss to Donald Trump. She then accused Bernie Sanders of introducing the scourges of cancer, heart disease, and diabetes in a failed attempt to prevent her from stealing the Democratic Presidential nomination. Clinton strongly encouraged viewers to contribute generously to the Clinton Foundation, which benefits all Americans who matter.

Former President Barrack Obama said earlier today that Trump’s effort was a wasted one, since dread diseases that affect all Americans are fake news. He pointed out that he’s visited all fifty-seven states, and never has he seen anything like what President Trump described. The former President insisted that the money thrown away caring for American citizens would be better spent financing Middle-Eastern tyrants.

Meanwhile, Hollywood elites stood in solidarity with Democrats, denouncing President Trump’s attempt to better humanity. “We hate Trump fair and square,” one celebrity said. “For him to do good things would make us look bad for hating him, so it’s just not fair for him to do something good. The military should stop him from doing that.”

No real college students could be reached to find out their reactions. Only College Republicans and other students who think for themselves were still moving about campuses. Any students holding valid opinions went to their safe spaces as soon as classes were cancelled in the wake of the President’s tweet. Counselors have been called in to help them deal with the trauma.

For those who can’t get over themselves, this is satire. The entire piece is fictional and should be taken as such. Except the reactions of the leftists. Those are pretty much the real thing.