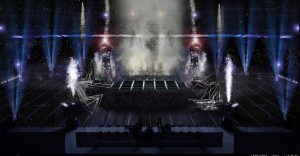 See, this is what happens when you try to walk a line. The NFL, who has been increasingly hated by conservatives for their weak-spined response to the anthem kneeling controversy of 2016, is apparently now also hated by leftists.

Now, most leftists probably don’t care that much one way or the other about high-impact contact sports like football, but they do care about anything connected to identity politics and, thanks to one Colin R. Kaepernick, they definitely care about the NFL.

Turns out, they’re pretty pissed at the NFL too.

So much so, that no one in the entertainment industry will touch the NFL Superbowl Halftime Show gig.

The NFL first approached Rhinna, who declined because she “supports Colin Kaepernick.”

Then, they asked Maroon 5, who accepted, but is now facing keyboard warrior boycotts complete with special signs and petitions:

So this hasn’t been super helpful as the band tries to recruit other artists, like Cardi B, who has apparently left them hanging:

Vic says, “Hey @iamcardib: We know you support Kaepernick. Please say you won’t perform at the halftime show with Maroon 5 until the NFL does right by Kaepernick and all players who #TakeAKnee." pic.twitter.com/KekwAVLWKj

According to Variety, “more than a half-dozen stars” have turned the gig down, including Andre 3000 and Mary J. Blidge.

Variety claims that Usher, Lauren Hill, and Nikki Minaj remain possibilities, but they’re sure to face their own backlash for obvious reasons of identity politics.

“So now it’s basically like the Oscars. It’s proof yet again of how the left seems to eat its own on a regular basis,” muses Cillian Zeal at Conservative Tribune.

“Maybe Kevin Hart will do it? I hear he’s free. Can he sing?”