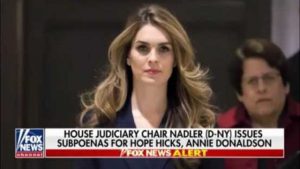 A new report is stating that the White House advised two former members of the Trump administration, former communications director Hope Hicks and former White House counsel Annie Donaldson, not to cooperate with a congressional subpoena that demanded them turn over specific documents.

As you might imagine, the left is jumping all over this, claiming it’s evidence of obstruction of justice from President Trump and his administration.

“As part of President Trump’s continued obstruction of Congress, the White House has instructed both Hope Hicks and Annie Donaldson not to turn over records in response to subpoenas issued by our committee last month,” House Judiciary Committee Chairman Jerrold Nadler (D-N.Y.) said in a statement to the Washington Post. “I note that Ms. Hicks has agreed to turn over some documents to the committee related to her time working for the Trump campaign, and I thank her for that show of good faith.”

Nadler’s committee issued the subpoenas last month to the two women for documents related to their time in the administration. The deadline for handing the documents over is Tuesday.

The White House argued that Hicks and Donaldson could not legally turn over the documents the Judiciary Committee requested since those documents were the property of the White House. Nadler said that Hicks and Donaldson could no longer be protected by executive privilege from complying with a congressional subpoena, since they had not been part of the administration for months — and added that they might never have been covered by privilege to begin with.

According to CNN, Nadler is likely going to hold Hicks and Donaldson in contempt of Congress if they ignore the subpoena.

This isn’t the first time President Trump has advised a former member of his administration not to comply with a congressional subpoena. In May, he told Don McGhan, his former lawyer, to ignore the subpoena and not testify before Congress. Donaldson used to work for McGhan when she was part of the president’s administration.

Anyone else really wish we could all just move on from all of this Russian nonsense and get back to issues that actually matter. We were all so hopeful the left would just give up after the conclusion of the Mueller investigation, but it appears there’s no such luck of that happening.

They know deep down they cannot face off against Trump next year because they will surely lose, so they’re trying to boot him now. It’s a desperate strategy to say the least.