The Onion Has Just Declared War on Mark Zuckerberg, And It’s Beautiful 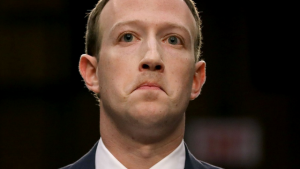 The Onion, the hilarious satirical news website that has been cracking us all up since long before the dawn of social media, is usually an equal opportunity mocker when it comes to the news.

But this week, they’ve been particularly brutal in their mockery of Facebook founder and CEO Mark Zuckerberg, who, between his awkwardness and clear thirst for world domination, is pretty much just asking for it.

The Onion, however, actually has a pretty serious reason for going after Zuck, and it’s one we can all relate to: they’re sick and tired of Facebook censorship.

“Over the last two days, The Onion has published around a dozen articles ridiculing the social network and its founder, and it says there’s more on the way,” reports SF Gate.

The Onion’s editor-in-chief Chad Nackers told Business Insider that the comedy onslaught is because Zuckerberg has “repeatedly betrayed the trust of billions of people,” and because Facebook is choking off traffic to The Onion’s website.

“We have 6,572,949 followers on Facebook who receive an ever-decreasing amount of the content we publish on the network,” Nackers said, calling Facebook an “unwanted interloper” between the publisher and its audience.

In other words, The Onion is on a mission.

Indeed they are. Browsing their homepage, you can see some of the first shots fired. Mark Zuckerberg Insists Anyone With Same Skewed Values And Unrelenting Thirst For Power Could Have Made Same Mistakes was published Thursday, along with Facebook Users Ashamed Of Criticizing Company After Seeing Heartwarming ‘Here Together’ Ad Campaign.

These were followed by Daddy, I Don’t Want To Live In The World Your Website Has Created, a satirical open letter from Zuckerberg’s infant daughter, $30 Million Donation From Chan-Zuckerberg Charity To Help Kids Learn To Read Returned, and my personal favorite, ‘You’re Deleting Your Account? We’ll Be Sad To See You Go,’ Says Facebook Prompt Showing User Photo Of Own Dead Body.

The parody site, like so much of the media, isn’t exactly right-wing, but it just goes to show that a company like Facebook having established such a huge part of the current infrastructure in place for sharing information and establishing a given brand’s sphere of influence is something that affects all of us.

Looking forward to more funny Zuck-themed Onion stories…if I can see them on my timeline, that is.