The Next Time A Liberal Complains About Flint’s Water Crisis, Show Them This 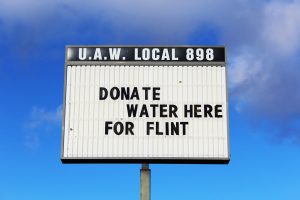 Has anyone else started to think it might save our liberal friends some time if they just wrote “…meanwhile Flint still has no clean water” on a ping pong paddle to hold up every time they get triggered by something?

It’s an increasingly common trope shouted in response to any display of massive wealth, profound poverty, or, really, anything that sets these folks off. Almost invariably blamed on capitalism, rather than crony capitalism and Flint’s bungling and corrupt government, the people of the little Michigan city are a handy talking point for the left.

And, of course, the natural forces of free market capitalism that have actually helped to save the people of the poisoned city go unappreciated by leftists.

After looking over new information that has come to light, however, I wonder how much longer we’ll be hearing capitalism blamed for the criminal misdeeds of Flint’s government.

An exclusive by The Daily Caller (thanks to the bravery of an anonymous whistleblower on the city council) reported that the government of Flint forked over tens of millions of dollars in much-needed aid earmarked for the replacement of lead water pipes to an inexperienced contractor.

But, hey, who needs experience when you’ve got friends who work for the City of Flint?

According to The Caller, administrators in charge of the project also ignored time and cost-saving techniques of testing for the presence of lead pipes, instead opting to dig up acre after acre to find them.

“The city prohibited contractors from using an efficient method of digging holes known as hydrovac excavation,” the councilwoman reported. “That leveled the playing field for a contractor, WT Stevens, with no experience or the appropriate equipment — and let it bill far more to taxpayers, she says. All of these factors, [the councilwoman] adds, needlessly led to more waiting for anyone who actually has lead pipes.”

So, knowing that they’d be paid promptly and handsomely courtesy of the Flint taxpayer, the contractor “chose to dig up yards that they knew were copper, and they decided to hand dig instead of hydrovac,” the councilwoman continued. “That was because WT Stevens didn’t have the ability, and you get more money [digging by hand]. It costs $250 [to hydrovac] versus thousands to dig a large hole without the equipment.”

According to The Daily Wire:

Flint’s mayor, Karen Weaver, and one key Flint city councilman, Eric Mays, both appear to have cozy relationships with WT Stevens, and supported the contractor even when the work looked shoddy. The pair were also behind the decision to dig up every yard looking for lead pipes, even though a University of Michigan study was able to predict where the problematic lead pipes were with stunning 94% accuracy.

The “predictive model” could be extrapolated, Flint clean water activists said, but WT Stevens dug up areas where there were no predicted lead pipes in “exploratory” projects.

Sadly, this is merely the latest of a series of revelations of gross mismanagement by the government of Flint in the water crisis that dragged on for years.

Flint first converted to their local Flint River water system from Detroit’s costly water in an effort to come back from the brink of bankruptcy. After doing so, however, it was discovered that decades of neglect had left Flint’s infrastructure in dire need of update. After Flint city officials had previously raided monies set aside specifically for the city’s water supply, the people of Flint citizens were exposed to dangerously high lead levels in the water and told to drink it anyway.

While Flint’s water may now be safe to drink (and has been since early 2017), it is certainly not due to the efforts of Flint’s government or the bleeding heart keyboard warriors.