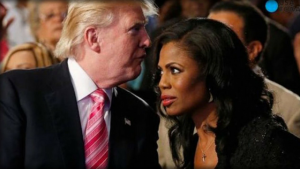 Omarosa, the reality-star-turned-Trump-White-House-reality star, has been making waves in the media this week ahead of her upcoming tell-all book release.

Apparently, when you hire a reality star to work in a presidential administration, she’s pretty much going to turn everything into a reality show, and that’s exactly what she’s done.

Since there are no longer scheduled confessionals in which she can vent all her bitterness towards the President after her dramatic exit from the White House, she went after a book deal instead, and has been taking every opportunity amidst the publicity the book is receiving to slander and bash the President, which, as you can imagine, leads to a lot more publicity.

One of her outrageous claims was that Trump regularly used the “n-word” while lumbering around the White House (and we all know the mark of a true racist is one who wanders around randomly spurting out racial epithets), a claim which has definitely received its fair share of hyped-up media attention.

Particularly from the New York Times, who prides themselves on being a newspaper, although this claim is about as dubious as Omarosa’s claim of Trump’s frequent use of the n-word.

Staff writer Maggie Haberman, knowing and admitting full-well Trump’s use of the n-word was completely unsubstantiated, still decided to craft a headline and opening paragraph that gave the impression it was reliable.

President Trump frequently used the word “n****r”  [Haberman did not herself censor the word] while he was the host of the reality television show “Celebrity Apprentice,” and there are tapes that can confirm it, according to a new memoir by one of Mr. Trump’s former White House advisers, Omarosa Manigault Newman.

Notice how carefully she’s worded this to make it seem as though it’s a simple fact that Trump used this word?

She waits until the second paragraph, which no doubt many readers might not even bother getting to, to explain:

The claims, based on hearsay, are among the more explosive and unverified ones that Ms. Manigault Newman makes in the book, “Unhinged.” It was first reported by the British newspaper The Guardian, which had an early copy.

Um…so what you’re saying is the explosive headline you just crafted is based on a total non-story?

And they wonder why we don’t trust the media.