The New Face of the #Resistance: Kathy Griffin and Stormy Daniels Team Up 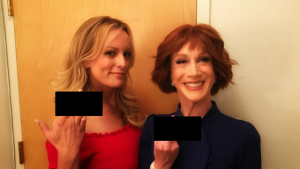 Kathy Griffin is trying to piece together a career after her horrendously tasteless photograph of the already washed-up comedienne holding a severed Trump head, ISIS-style, got her reprimand even from the left.

Since she maintained her apology for all of five seconds and has been making waves again by blurting out obscenities about the President on The View and Twiter, she and her (poor, poor) management must have decided it was time to make a comeback.

Not that we really got rid of her for all that long anyway. But, whatever. Girl’s gotta eat, right?

So Griffin has departed on a comedy tour, very tastefully titled “Laugh Your Head Off.” Yeah, no one warned her against that one, apparently.

Griffin captured the heartwarming moment when the two women bonded over their articulate objections to the Trump administration with the hashtag #F*ckTrump.

. @StormyDaniels it was an honor to have you at my Boston show tonight. I support you 100%! #FuckTrump pic.twitter.com/MSPQBy18yh

When I first saw this tweet, I thought it was Griffin who had been to Daniels’ show, so I was very much relieved to find that this was not the case, and we certainly hope it never will be.

For two women who claim to hate Trump, he certainly does seem to be the center of their universe.

So far, Trump has refused to comment on the allegations and no wrongdoing on the part of Cohen has been proven. But Daniels’ and her attention-starved lawyer Michael Avenatti are both greatly enjoying their time in the spotlight.

This is the face of the #resistance. Kathy Griffin and Stormy Daniels. Here we come, Trump 2020!