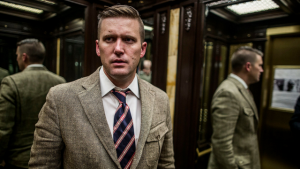 Richard Spencer is the left’s poster boy for white nationalism. They claim to loath his focus on saving white America and his claims to the superiority of the white race, but in reality, they love him.

Becuase in him they have found a perfect example of everything they hate about the right, and everything they’re always accusing conservatives and Republicans of secretly believing.

The left absolutely loves to have someone to hate (does the left secretly love Donald Trump for this reason too? It’s likely) and someone from whom they can claim they’ll rescue the downtrodden masses.

Richard Spencer’s emergence during the early Trump era and his adamant support for Trump in 2016 was a dream come true for the leftist narrative.

Also sorely mistaken is anyone who thinks that Richard Spencer is remotely conservative, or remotely right wing.

In a recent interview with Dinesh D’Souza, Spencer outlined his personal belief system which sound eerily similar to the progressive platform of the 1930’s. But anyone who knows anything about what the likes of progressive icon and Planned Parenthood founder Margaret Sanger believed, this will come as no surprise.

Spencer isn’t a conservative at all, he’s a total statist progressive.

D’Souza asked Spencer about his beliefs and their philosophical underpinnings, including whether or not he sought to conserve the principles of America’s founding.

“I’ve been critical of the American founding throughout my career,” Spencer replied.

The whole concept of individual rights, he said, was “problematic.”

Later in the interview, D’Souza asked Spencer about the fundamental conservative principle of limited government.

“No individual has a right outside of a collective community. You have rights, not eternally or given by God or by nature,” Spencer said.

D’Souza then asked: “Who gives them to us?”

Spencer replied: “Ultimately the state gives those rights to you. The state is the source of rights. Not the individual.”

This couldn’t be more contrary to the foundational beliefs of conservatism and our nation as whole. Which, consecuentally, makes them quite consistent with modern progressive beliefs that rights are handed out by a benevelont government.

The only difference between the modern left and Richard Spencer are the people they claim deserve those rights.

Where any good conservative knows that God gives us our rights.